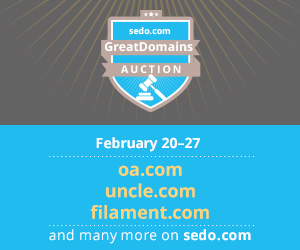 Had family over last night and it turned out to be pretty late before I got the kids in bed. I worked on the post and thought I hit publish before calling it a night. I guess it didn’t take. Hope my 2 or 3 readers are not too disappointed with the delay!

Swarf.com 12 years old. A thing but all the bids are coming from it being a short brand

HYP.cc Even I am surprised at the price of this one

Graphic.io Has met reserve. I think graphic and dot io complement each other.

Graphic.io: Sold by Auction $1,751. Agreed, these work together. nice name.

RXGO.com: Auction ended unsold $240. I wouldn’t have sold this one at that price either.

GameGo.com The seller is certainly the king of go names. Getting a great price but as seller is in love with his own names

GameGo.com: Auction ended unsold $3,600. Great price for this name. 3600 for a domain that was probably a hand reg? Sell it allllll day long.

DDD.xyz Don’t tell anyone but I like this one because it rhymes

FPFA.com Only 20 bids on Namejet. But I love LLLL.coms that end in A. I wish I would have liked ones that ended in Q. I would have made more money

WIPD.com Sounds like a TV or radio call letters. 15 bidders

PMMO.com More good letters. With Labor Day today in the US you’re going to see mostly LLLL.com and not as many keyword domains because sellers are afraid people will be eating burgers instead of buying domains

PMMO.com: Sounds good when said together.

No Result List- Results may be added at a later date.

eCakes.com I still don’t like I names but now I like e names. I’ve seen the light and realize everyone associates online with E

eCakes.com: I like them both. That being said I don’t like this name all that much. I just wouldn’t think ecakes sounds appetizing.

NNTN.com Next bid crosses it into four figures

DomainLegends.com No bidders. A fanboy can buy this and build it out

DomainLegends.com: I would build this out and it would just be a picture of me. Description: Writes on domain Shane a bit and has sold some domains. Que the ooo’s and ahhhh’s.

878800.com Under $75 at press time. I think its worth more. But I’m a central Illinois domain investor. As far away from China as you can get

5200.co Shows you that numeric dot co doesn’t have much value