The Daily recap of Shane’s Auction Picks, the 17th of February

Yesterday I had to turn my text notification for Godaddy auction off. My phone was blowing up with offer received texts. Someone must have gone through all the LLLL.com’s in offer counter offer and gone crazy. Probably not a bad idea to get a few good deals. I raised the minimum offer on all of them, but it’s good to know that someone will pay $290 for every single 4L out there.

I also had the emails coming in. One in particular was from a guy that I’ve sold non chip 4L’s to in the past. He said he want’s lots of them.

The new .cloud extension is out. I talked to a couple of guys from .cloud at namescon. I told them they should make logo’s that were clouds in the shape of whatever Chinese animal year it is. They liked that idea, I think the context of the conversation was marketing to China. I don’t think they had explicit plans to do that. At this point I think any registry operator should have a well thought out China game plan.  I haven’t seen any animal cloud logo’s so I made them one. 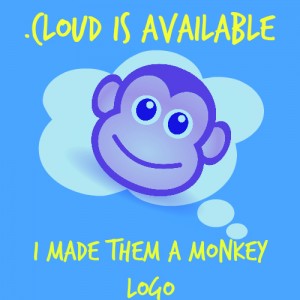 MDO.org   No reserve so you don’t get that red reserve ribbon that scares everyone away.  Good Western Letters

DRP.org   One just like it but I can’t get past the expiration date. Too close, too close

WhatYouLike.com  A bit Tarzanish but I get why people would like it.  17 years old

290 USD, I like it. It’s a common phrase even if it’s just partial. It can used in a sentence and sound non-mongoloid. “I know what you like” of “We have what you like” are tag lines that you could use for the brand.

PQI.com  Q is for Quality. I think I said that yesterday too

?  Looks like the average according to Travis is around 40K, I think this is a little better than average with the Qi, but these aren’t in my wheelhouse. I spend my time in the slums and on the streets with the working class domains, not the royalty.

GUJI.com  Damn!  This one must come with a piece of land in China at that price

40,001 USD Guji Guji Written by: Chih-Yuan Chen  Not Just a CVCV but pinyin with lots of different meaning and a book, among other things.

StampCamp.com   And you thought Band Camp was full of the special kids.  Joke value only

102 USD Really? Shane lets joke about some of the crap names I have.

YPA.net  You know when I say if it sounds like a wine or an IPA its a good name.  This wasn’t what I was talking about.  But its still a good name

? I wish I knew what the bidding reached not a bad VCCV, These were the names we used to hold onto waiting for them to be bought as acronyms. International Radiological Barnacle Union.

BestBlueberries.com   Not a bad marketing name for $12.  No bidders. 14 years old

? If I’m buying blueberries, I want the best.

JJF.info  I can see how a LLL.info should have some value.   Even has an actual chance of enduser, which is more than many domains can say

9910.net  It has the zero but since there are only four numbers  we can all forgive it

Dojo.biz  All those three letter dot biz have value but not this one?  No bidders

? Must be slow year for the Dojo Business.

PNPM.com   I bet you can’t say it fast 10 times and get it right every time

HXBR.com  Also a CHiP but not the same quality as the above

Absolutely love these.  Going to be hard to win all of these but I put a bid in for all of them

They do look nice.

If you want the runts of the collection……………Josh

What’s this? but the average for 4 and 0 is like $27? Oh, there’s pattern there and these previously overlooked, last to be picked, red headed step children are almost at the average no 4 no 0 price. 🙂 well the 0 is anyway.

YZY.co  I have to admit this one is pretty.  And I think pretty makes up 43% of the value of the name

I thought the TJ would bring this one higher than the rest. I didn’t think it would only be $2.

These are some terrible scrabble letters right here. But when it comes to LLLL.net, they rock.

You make a very good point Shane. Maybe we should look into developing a no vowel pinyin scrabble game.

The only science to these prices that  I can see, is the time the auction ended. Looks like bidders blew all of there money by the end of the day and the last ones went cheaper.

If you are going to buy a LLNN.com then this is how I think you should go.  Doubles or double double if you can find them.  I think you’ll make money on all of these.  But don’t listen to me.  If you do you will lose all your money and you’ll be forced to take a job counting Frank Schillings gold bars each Friday afternoon.

I think LLLL.cc has a ways to run.  Opinion only

NingDing.com  I love it.  Memorable and fun. Even sounds a little Chinese which means absolutely nothing but everything is about China so I have to squeeze it in.  One bidder at $12

426 USD, Well it is fun and there’s also this “Ding Ning is a Chinese table tennis player. She was the winner of women’s singles in the 2011 World Table Tennis Championships.Wikipedia”

AspenColorado.com  Doing as well as I thought it would.  Aspen is one of the best cities in America

Ends Tomorrow and Reserve not met, currently at $16.7k

121191.com  Owner says it means “very prosperous business” in Chinese and I’m going to have to take his word because I don’t speak numbers

That’s the real beauty of the numbers you can make them mean a lot of different things. Ended unsold with 3 pending bids. Highest bid under reserve is $200.