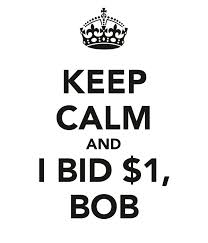 Contrary to what you see on at some domain auctions, there is some strategy/skill behind a listing. I read through the auctions over at Flippa and see countless auctions that have starting bids of $500, $5000, even $10,000. There is absolutely no point to starting an auction for more than a $1.

I get it why people may do it at other houses. Namejet starts at $69, Godaddy charges you to have a reserve, but a reserve costs exactly ZERO dollars at Flippa. I have yet to have someone give me a reason to start higher. Nobody thinks a domain is worth more or less based on the reserve price. If anything they judge it based on how many bids the domain has. It may take longer to get to the price but a domain that is at $2500 with 42 bids in my opinion, would grab more attention than a domain at $2500 with one bidder. Number of bids is also a sort that a lot of people use. The lower the starting bid, the better chance you have of more bids. When you see a line outside of a store or restaurant you are naturally inquisitive.  Why are they standing in line?  Something at the end of that line has to be special. An auction with several bids has that appeal.  And it’s proven.

There are some studies that prove that lower starting bids lead to higher prices. A study at Northwestern’s Kellog School of Business stated the following

The traditional belief is that a high first offer results in a high selling price. This belief is rooted in a psychological principle known as anchoring, such that the size of an opening bid is a testament to the item’s value. The numerical value of an anchor sets the tone of more or less prestige of the product up for auction. Furthermore, a high opening bid can spark the rose-colored-glasses effect, leading bidders to focus on the more positive features of an item.

Recent research by Adam Galinsky and J. Keith Murnighan, professors in the Management and Organizations Department of the Kellogg School of Management, and Gillian Ku of London Business School turns tradition on end. In a paper published in the Journal of Personality and Social Psychology, the researchers show that low rather than high opening bids—for a variety of products from shirts to fancy rugs in online auctions—generate high selling prices, demonstrating a reversal of the anchoring effect

Using data collected in laboratory studies and through the eBay archives, the researchers performed a series of experiments to investigate the effect of low opening prices in generating high selling prices and the psychological forces involved in this reversal. In an experiment with MBA students, more participants said they would bid in an auction with a starting price of $1 compared to a starting price of $10. The same pattern held true when participants were asked to imagine bidding on a shirt with an opening price of $1 or $24.99, since the lower starting price spurred more traffic.However, would the increased flow of auction traffic actually lead to a higher selling price? Could it be that temptingly low starting prices increase the number of bidders and drive up the final price? The researchers scrutinized data from actual eBay auctions to see whether the same product offered at different opening bids would command different selling bids.To allow the results to be generalized across goods, the researchers chose two different products—a Nikon camera and a Persian rug—to compare the relationship between the initial asking and the final selling prices. “Nikon cameras are plentiful, and people generally know how much they’re worth whereas the Persian rugs are one of a kind and hard to price,” Galinsky said. Data including the starting and ending prices and the numbers of bids and bidders were analyzed from auctions for 179 Tabriz Persian rugs and 87 Nikon digital cameras. For both products, the researchers found that a low starting price led to a higher final price. They also verified that lower starting prices led to more bids and more unique bidders, indicating that traffic contributed to escalating the final price.

In short, sellers that are starting their auctions above $1 are hurting their auction on Flippa.  They are missing an opportunity to draw attention to their auction and may even be getting a lower price.  On a side note, I am amazed how many people will put in a bid for that $1 or $10 and be done.  A domain that everyone knows is worth thousands yet they top out at double digits.  I have no idea why they do but they do and I’m glad they do it.  Because somebody has to start the line.