Domains for Sale:
Advertise YOUR NAME HERE for as little as $2 a day
by AaronPosted on September 11, 2017

When driving back to Denver recently from the mountains, my eyes were drawn to a prominent billboard with a great domain: Denver.com. 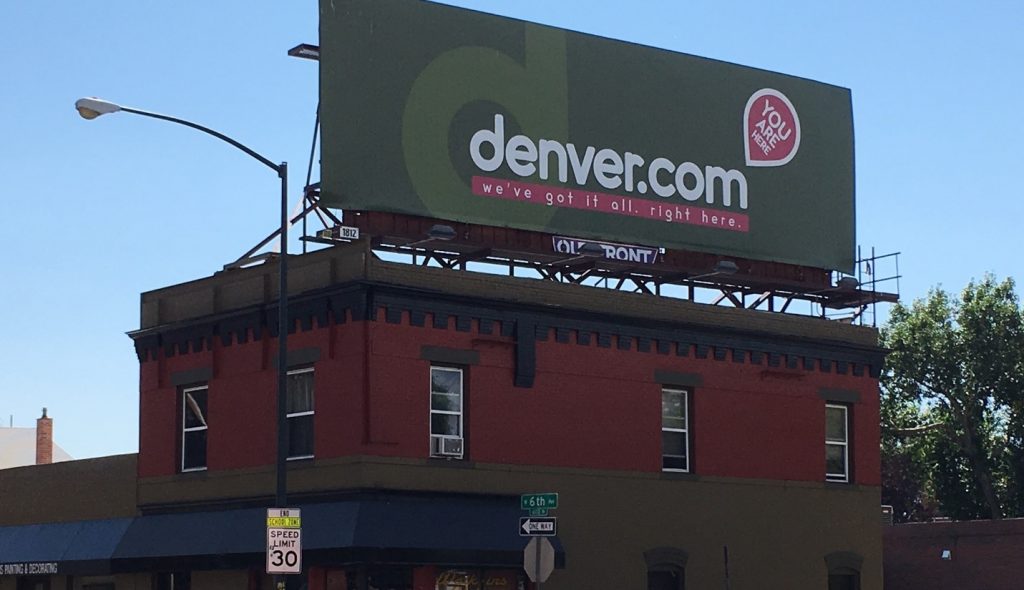 I went back and refreshed my memory on the domain……it was purchased in 2012 in the 7-figures by Peter Niederman, a Denver-based businessman and CEO of real estate firm Kentwood Real Estate.

Mr. Niederman said at the time, “I own more than 600 domains. I’ve been investing in them for more than 12 years now. Some are cheap, some are expensive. This one is my most expensive. But in my opinion, it’s priceless.”

He told Elliot Silver a few years later that the domain had already “paid off”, and he owned additional domains such as DenverRealEstate.com, DenverHomes.com, Boulder.com and FortCollins.com.

Having visited Denver.com previously, I didn’t recognize the look & feel of the billboard and the current site, and below are two screenshots: first from this week, and second from two months ago (July 7), thanks to Archive.org.

The press release from the August 2012 domain acquisition mentioned a multi-year agreement under which the seller, Boulevards New Media Inc., would operate Denver.com, and given the recent site redevelopment, I reached out to Mr. Niederman to see if there was a shift. He said, “Yes, you are correct, Steve Morris, CEO of New Media (Denver) has taken over the Denver.com platform from Boulevards New Media.”

With the owner’s real estate business, I also inquired about the lack of real estate listings on the current site. He confirmed the site is still being refined, saying, “We are working on the real estate feed as we speak. New Media has done a wonderful job at the initial launch, a lot of great features to come in the near future.” He also estimated there are “30+ bloggers creating dynamic content”.

New Media is based in Denver and describes themselves as “Older than Google but younger than Amazon—we turned 21 in 2017!—we provide high-end custom web services. We are the most established provider of Drupal and WordPress web development services in Colorado and will act as a highly technical and expert extension of your own team, which we promise to make stronger.”

It will be interesting to track the progress of the site over time, and we of course wish the best to Mr. Niederman and his team.

One Reply to “Denver.com Redevelopment”