When I first started blogging in 2007 the whole goal was to prove to my wife that I could get 1 million people to visit my site. I accomplished that goal with my first site WallStretFighter and sold it at 8 million visitors. I tried it again with LookU.com and hit 1 million visitors in the first 6 months and sold it. I knew when I started a blog about domains that the 1 million visitor mark would be tough. Tough because the audience was much smaller. Tough because I didn’t want to cheat. Cheat by putting hot girl pictures for Google to pick up. Cheat by having friends stumble the site or post links on Reddit. I wanted people that chose to come to the site and would stay on it once here. The 6 second visitor is worthless. With time and a little hard work a million finally came.

It took three years and if it proved anything it was that I stick with something. I feel like I put in the time and effort and just enough good material mixed in with the junk that it makes it worth coming back. I’m like golf. You hate it but there is that special moment when you hit a good shot that good shot keeps you coming back to get that feeling again. So thank you to all the people that come back each and every day. Thank you to all the sponsors that keep the tank full of gas. 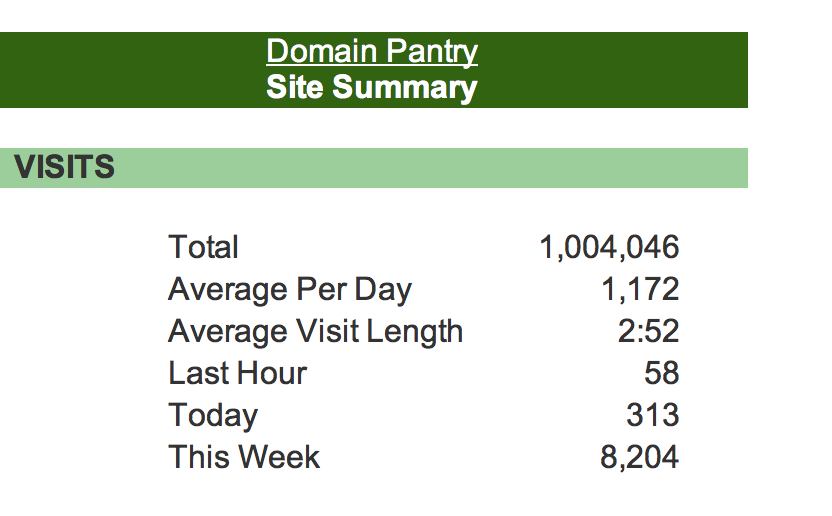 I’m proud of the average of 3 minutes spent per visitor. If it were under a minute I would quit writing. It means most of your visitors have no interest in what you’ve written. The average per day has gone down since Google stopped sending as much traffic but I’m Ok with that. They still treat me well. As for the name “Domain Pantry”. That was the original name of the blog. Then Chef Patrick acted like a little baby and said that it was too close to Chef Patrick and he was king of the kitchen. I was on the fence with DomainShane anyway so it made it easier. Now I’m king of the kitchen and he’s trying to sell them.