The Daily recap of Shane’s Auction Picks, the 8th of March 2016

This is the best business in the world isn’t it? Where else can you find people opposed to what you’re doing inadvertently help make you money just by what they say?

As far a RNLPQ, thank you. Now I can get 3 of 5 RSTLN most used English letters at a discount.

Does anyone really think that the Chinese who have bought millions of 5L and 7N .com’s not to mention the majority of NGTLD’s, have lost faith in the LLLL.com’s. I’ll tell you what’s happening, just my opinion of course, Opportunity and ROI. I did the same thing a couple of months ago, I sold a lot of my Chips and recently 4 more, not because I thought they were crashing, but because of opportunity and ROI. Since then, I’ve bought other “speculative stuff” and  I’ve sold certain strings for 25 times my investment, others for 3-6 times. It was riskier I guess, some might say it’s the same level of risk, but it was all about cash equity. That’s the backbone of “liquid” domains right? I can hold them until I need cash and liquidate them.

I could be wrong, wouldn’t be the first time, it’s just that I see the exact same thing I did, unfolding in front of me. At 25 times return I would have sold all the chips for 50% of value. If I didn’t have any cash,  and thought that the price of another asset was going to go up 5-10 times in the next couple of months, you bet I’d move whatever was selling for the cash.

The other angle is this: If this is what’s happening and I don’t know what the other big thing is or don’t care to speculate, it’s a great time to scoop up the 4L chips. Like I said, there is no f-ing way that the chinese investor who’s buying 5L.com’s thinks that 4L’s are going down long term, because they wouldn’t be buying the5L’s.

And there’s no hype or promotion here, like I said I sold most of mine to buy “crazier” things. One more thing, we focus on this past fall because it was nuts, but all the 4L’s that I bought 2 years ago for peanuts have been steadily rising for the past year. The spike came out of the blue, but the value was creeping up for months and months.

And If one more person says “Well I just can’t see what they would use those stupid random letters or numbers for anyway, I’m from ‘Merica and they don’t mean anything to me,  I knew this was a scam from the start.” …. lol 🙂

Also the wire from DN.com came through. So I do recommend DN.com or escrow services.=

King88.com  If you look, this is exactly the type of name the Chinese are building out.  Words they use from English like Big, Happy, Fun with the 88 at the end

? I love China88 when I’m at work, I usually get the General Tso’s.

XHXX.com   This is going to do well.  Chinese LOVE the X

Plexion.com  Was a company and good enough name to be another one

203 USD, Looks like it went to an expired auction last year at this time. They used to be the exact same day different year, now they’re all out of whack. Thanks a lot Leap Year.

LeafRemoval.com   Almost every home has to do it every fall. And many pay for the service.  And trust me I know, I get paid to do it

VHSG.com    If the LLLL.com has a V I like it to be at the front.  Works best in an acronym there.  The other letters are solid

DoorFrame.com Most boring company name ever. But it has bids

191 USD, Ahh but it could be awesome for something random. Everyone would remember it eventually. “Where did you get that awesome coffee mug?”  Oh, this old thing,? Got it on DoorFrame.com, they sell custom coffee mugs.

266 USD This is a sign, just write down the auction results and stop trying to be tooclever.com.

Labiaplasty.com   Since many of you domainers haven’t seen a girl naked I’ll explain.  Some times the private parts of a girl get a little banged up during childbirth so they opt to have it corrected.  #prettykitty

? Lol, One of my favorite Domain right ups. “ get a little banged up”

LincolnTrail.info   I live a few blocks from part of it.  88,000 backlinks and a 100 free visits a month.  Looked it up and actually it was our town’s library system url until it became part of another system.   I guess it was meant to be mine

OVGI.com 1125 USD  Uh oh look out, The Chinese have abandoned Chips for these.

ManSoup.com  “I’ll take a bowl of that”   Here’s your free slogan

Still available as a closeout… I will pass on the Chowder, it’s too salty.

JFST.com   Will be interesting to see how the CHiPs hold up over the next few weeks. A lot of people calling for a collapse…………again

0YR.com   Don’t like it but can’t ignore the price and the bids 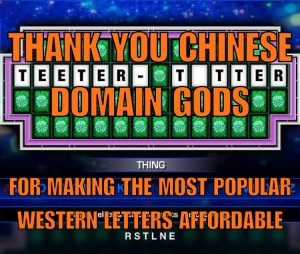 NXLT.net, 186 USD, Well, well, well, what do we have here? A bastard letter right in the middle of this LLLL.net used to be Chip. I have taken the liberty of renaming RNLPQ “Bastard” letters. It’s not derogatory it’s descriptive. So these are Bastard Chips.

BLLR.net, 205 USD Another Triple Bastard. All this is, is an attempt to undermine the WHIP.

The LLLL.net have been getting crushed.  They will finish higher but not that long ago these were always at $200 when I would make my post each night for the next day.   These things are so volatile they are great for making money

SWU.co   I tried to buy 3 CHiP LLL.co yesterday .  Bid $1005 on all of them.  Only won two of the auctions and of those, one got renewed one hour after I won.   Getting tough to find

129 USD Were they real Chips? Or Bastard Chips?

MMT.me  LLL.me pretty much have no value at this point but there are people starting to speculate at this price thinking they may catch a wave

105 USD. So I actually think they have value, to end users. I sold one to an end user once, just once.

181 USD, Is this supposed to be a place you take your cat to scratch?

ZZXCC.com  Very nice pattern 5L.com   These were going for $300 at one point

MMMMV.com    Fantastic and then came the V

SeriousExercise.com  You know their is some CrossFit lunk that would love to have this

?, It’s all business, no laughing, you can’t even smile. Just grunting and shouting.

WBCG.co, BGLS.co, WSFW.co, CTRS.co, FWWS.co KYNY.co  I think these are going up.  My opinion only and if you buy them I can guarantee they go down and you will lose all your money.  The you’ll be forced to take a job helping Adam Dicker move his stuff into his new tiny house.

? It doesn’t pay anything, but you get to build fake businesses together. It’s really not that hard to make a fake business, most of the work is outsource to Nepal.

877.io  These have really jumped in price lately.  I almost bought a bunch of these but just didn’t pull the trigger in time. Costs me a few thousand

Thunder.io  The perfect dot io name IMO.  You want to have a brand and Thunder is a great brand

1XL.com  15 years old and nice and short.  Those types are catching on