A couple of days ago, we took a look at the volume of names purchased over most of December.  Today I decided to look at the total amount spent in USD.  December 19th really was a banner day in terms of volume and dollars spent.  Over $700K was spent on that day alone.

I’m happy that 2016 is now here.  I was holding off selling pretty much anything at the end of 2015 for tax reasons.  I need to actually sell some stuff now.  Good luck to everyone in 2016 and Happy New Year! 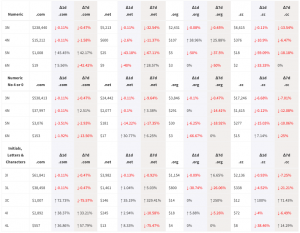 Most of the descriptions are easily understood, but just in case there are questions:
N = Numeric
I = Initial (a letter not including a,e,i,o,u,v)
C = Character (any number or letter)