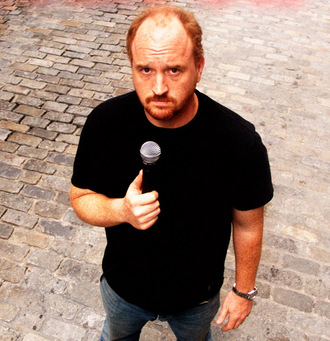 Louis C.K. is funny. Scratch that. Louis C.K. is f-ing hilarious. If you’ve never seen Louis C.K.’s stand-up comedy, I highly recommend it…and because of his new online experiment, he’s making it easier than ever to see him, while laughing all the way to the bank.

Louis C.K., real name Louis Szekely, has in less than a week innovated the way media is sold online. When releasing his new stand-up special “Louis C.K. Live at the Beacon Theater”, he decided to do it in a completely unconventional manner, selling a no-DRM video for $5 from his personal website. For Szekely, this was a big risk, leaving behind the securities of sharing revenues with large distribution companies by producing and selling the video himself. Not only is he selling it himself, but he’s selling it with no copy-protection restrictions which means it can be downloaded and copied by individuals in any way they want. In other words, Szekely basically bypassed the inevitable illegal distribution via illegal downloads by making a no-DRM video but made it so easy and inexpensive to buy the video that it’s not even worth taking the time to illegally find and download it. By doing this, he’s more or less saying “Look, I’m making this as easy and cheap as possible to buy…why steal it? Just help me out here if you like my work”, and people have responded. 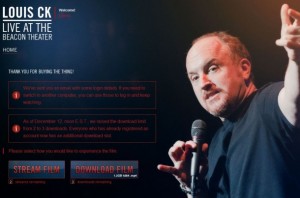 In the first 4 days of the release, the video had already profitted about $200,000 according to a statement on his website.  The video, which cost $170,000 to produce on his own, has already received more than 110,000 paid downloads. Other fees included $32,000 for his website (I’m guessing the majority of this cost was to set up a top of the line server to handle traffic and downloads, because the design of the site certainly isn’t worth that price) to sell the downloads and also Paypal fees. He edited the video himself which took a few weeks of his time as well. In retrospect a great investment that has already paid for itself with over $500,000 in sales in half a week.

So what does this mean for online media in the future? It really depends on the situation. Szekely said he’d like to distribute all of his future work this way and for him that may work. Personally I think it takes just the right recipe for this to work. An artist that is just big enough to have a small but loyal following would most likely find benefits in distributing this way, while smaller artists would benefit from the promotional aspects of signing on with larger distribution companies. I think this could be true for both musicians and comedians. I certainly think you could argue it both ways and I’m sure it could be debated for years. What do you think? Does this have enough steam to pick up some traction among other artists or is it a one-off success?

And by the way, if you want to laugh your ass off, go buy the video. I did. Normally I’d try to find a discount code for something I’m recommending, but weren’t you paying attention? it’s $5…c’mon.