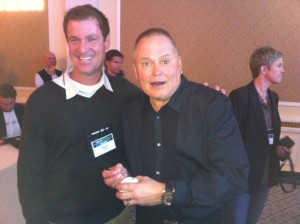 It was one of the most awkward moments I’ve ever been involved in.  Bob Parson’s gave a speech at DomainFest that was pretty good. The stories were honest and fairly well delivered but there was something about it that seemed uncomfortable. At all points in time I felt like he wanted to curse, drink, and make inappropriate comments.  I have no idea if any of that were true, it’s just the feeling I got.  He came across as rough, a fact he admitted during his speech as he talked about his childhood.  Bob is a man that built his businesses the old fashioned way and it didn’t involve political correctness. By the end of the meet and greet it was very obvious he couldn’t wait to get out of there.  He look tired and confused.  This picture of him and I seemed to sum it up.

Parsons knows sex sells and controversy is good for getting out his company’s name. He’s playing this off as good for business but I think his PR people might disagree.  Despite the fact he is the vision behind Godaddy, I’ve always thought Bob Parson should stay out of the spotlight.  My thoughts were proven when he spoke at DomainFest.  Then he drove the nail in further when he went out and shot and killed an elephant and bragged to the world about it.  No doubt he’s a great businessman, but he is a terrible public image for his company.  From the gaudy diamond ring to his views on the young ladies, it’s just not an image that a global company wants to have.  Perhaps if he owned a poker site it would fly, but it’s not good for Godaddy.

I’m sure people are going to say “Hey, look at all the free publicity he’s received through this”  There are plenty of ways to get good publicity and it doesn’t always have to be controversial. But enough about him, let’s talk about my baseball.  I always keep a few baseballs with me whenever I go see a “famous” person speak.  I’ve always collected autographed baseballs.  A tradition I’ve kept since I was a kid. I’ve had everyone from Mikhael Gorbachev to Drew Brees sign baseballs. I figured I would have Parsons sign a ball and give it away in a contest.  Now I can’t decide if it’s lost value or maybe even gained value, but no matter what, I’m pretty sure nobody wants it.

It could also be the worst autograph I’ve ever gotten on a baseball.  It looks like I got it on his deathbed.  It seemed as if he’s never signed a baseball because he had no idea where or what to do with it (that could help value). When it was all said and done, I jut wanted to get out of there and take Bob out as well.  As I said before, he looked uncomfortable and confused and I’m pretty sure he won’t be signing up to do very many speeches again.  Although I can’t imagine he’ll have very many invitations. 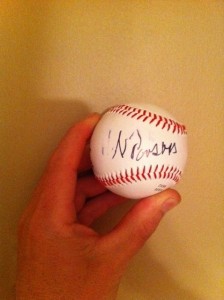 So what to do with this thing. Which of the following should I do?

1. Auction it off on Ebay and let the winner burn it.  I’ll donate the money to the animal charity chosen by the winner.

2. Have a contest and give it away on the blog

3. Have Chef Patrick and Nelson Brady sign the baseball as well and sell it as “The Controversy Ball”

4. Put it in the closet and forget about it.

16 Replies to “Damn It Bob! You Screwed Up The Value Of the Baseball I Had You Autograph”