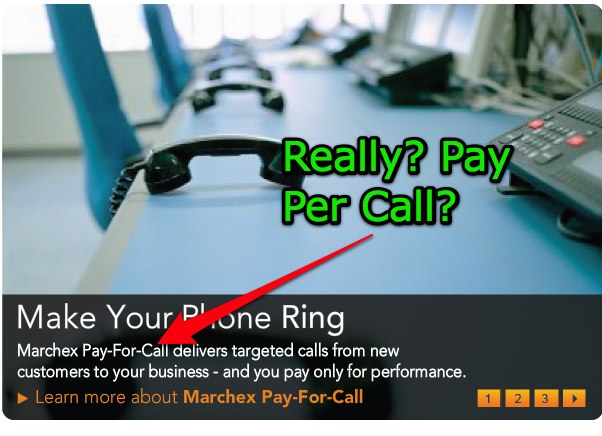 Marchex holds one of the better name portfolios in the industry yet they can only muster $23 million in revenues during the last quarter of 2009? That’s abysmal. Marchex is best known for buying the Yun Ye (Ultimate Search) domain portfolio, which Marchex purchased for 164 Million USD in 2005.   In 2005 this portfolio was generating $19 million in revenue and parking has certainly dwindled to nothing but c’mon, a company of that size can’t take that and the rest of their assets and squeeze out more than that? I can’t imagine why they’re not raking in the dough with the brilliant “Pay Per Call” campaign.  Then again,  I’m sure if that worked Google would be doing it.

I am absolutely positive I could take that portfolio and generate more revenue.  It’s not a very difficult strategy.  Build out sites and use the similar based domain names’ traffic which is targeted and use it to build the numbers.  Use this model over and over.  On the positive, they do realize the value of local but everyone in then industry has picked up on this now (except for local old school media)

According to their recent 4th quarter report, they “bragged” that they had over 70,000 advertisers.  That comes out to a whopping $328 per advertiser, not a very good number if you average it out.   You would think they would be better off packaging their domains together and selling a larger advertising package.  Looking over the report I see that publishing gave $7 million to the bottom line and $1.4 million from paid inclusion.  But here was my favorite quote “During the fourth quarter of 2009, Marchex sold a small number of non-strategic domains that yielded $2 million. There is still significant demand for high quality domains and Marchex believes that will remain the case for the foreseeable future.”

So according to Marchex, if all hell breaks lose we can always sell off our assets.  The way they’re managing their business model, this may be the only thing that keeps them in business.

9 Replies to “Don’t Use Marchex As a Domain Industry Measure: They Suck”