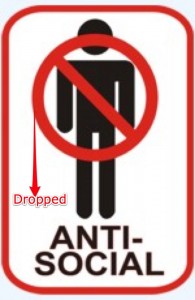 The domain Antisocial.com just went into auction over at Snapnames and it started out with a bang.  An opening bid of $936 and with huge amount of bidders at 183.  Created back in November of 1996, there’s no way the original registrar had any idea how important “social” would become on the net.  With popularity comes the whole “anti” movement and lord knows there are plenty of people that hate the whole facebook and twitter thing.

This is certainly a “forgot to renew” case because the owner had previously turned down 35 offers over at Sedo.   It’s a shame, I hate to see someone lose a name like that, but not being organized has it’s problems. One being accidentally letting names expire.  After doing a little homework I noticed in 1998 that a person that used the email [email protected] went around reviewing the book “The Sex Contract: The Evolution of Human Behavior”.  Each comment was “Never a book has helped me understand the very nature of human behavior like “The sex Contract”. It deals with the essence and origin of our acts and thoughts: sexual differences. A great book!”  I’m going to guess that he has some relation to the author and was interested in human behavior, thus the original register. It also seems that he tried to monetize the name using my own email.  A service that tried to use domain names and offer custom email names to people. There were a lot of first names and generic names.  It was cool back int the late 90’s, trust me.  Now anyone can get a unique email.  Or they just use Gmail.

What happened to the domain in the years since, I have no idea.  I don’t have a fancy DomainTools account (unless they want to give me one) to do real research.  I just know that someone had it parked at Sedo for a while and let it drop and Snapnames did what the do best.  Snapped it up and profited from their mistake.  Gotta love the Internet

One Reply to “Everyone Want to Be Antisocial…….dot com”