Domains for Sale:
LocationBusiness.com
PackMarijuana.com
by AaronPosted on June 15, 2014June 15, 2014

You don’t often see $500,000 bids pushed to auction at Sedo (let’s hope it’s legit!), but that’s what happened to FastFood.com, and there are just under two days to go in the auction.

The domain is lightly developed with an informational site (screenshot below), and has an Alexa rank near 1.7 million. They also appear to be behind a ‘Fast Food Nutrition’ app that sells for $2.99, but the value is in the domain. The current owner is under privacy protection. 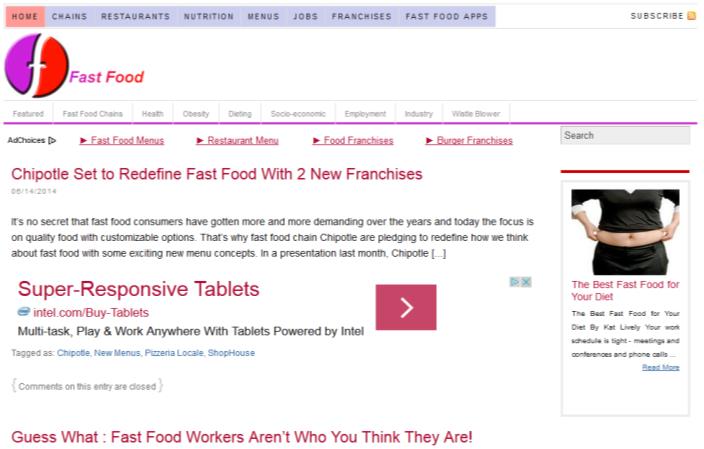 The offer description at Sedo is as follows,

“The fast food industry generates over 125 BILLION ($125,000,000,000) dollars a year in revenue. It has the largest workforce in the world, who are about to form a union which is sure to become a powerful force in the industry. The health implications of fast food will either be promoted, or defended, by sites like FastFood.com.

125 billion dollars a year is about 14 million dollars an hour, or $233,000 per minute. We are asking for about 5 minutes worth of revenue from the industry, to own the #1 domain name for that industry. Imagine if you could affect that industry by 1/10th of one percent.

Although it is unlikely you will sell hamburgers over the internet, FastFood.com is sure to be one of the most influential mediums used to steer and influence the fast food industry. This domain is offered at a reasonable price for an unbelievably powerful platform. “

There are plenty of books and documentaries about fast food, and there are a few restaurants and service companies that could use this domain as an upgrade. It’s unlikely, however, that many of these folks have a half million dollar domain budget. McDonald’s and Burger King have the budget for it, but they’re not re-branding to FastFood.com.

“Fast food” has great recall value (though not always with positive connotations), so perhaps the prospective buyer is unrelated to the industry and intends to use it as a brandable name? That would be a pricey brandable domain.

Who do you think the buyer will be (my fingers are crossed that it will go through), and/or how would you use the domain?