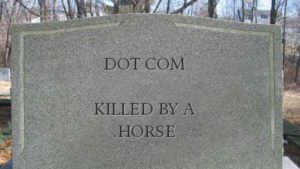 There were a lot of great talks at Namescon but one of the more “exciting” sessions was entitled  “New TLDs + ‘Domainers’ : The Opportunities“.  The session panel was made up of Mike Berkens, Adam Dicker, Ari Goldberger of ESQuire, and Fred Krueger of Mind and Machines (a subsidiary of TLDH, publicly traded)  .  The panel was moderated by up and coming comedian Braden Pollock.

Going into the session I was not as skeptical as the rest of audience. Some came in adamantly thinking new gTLDs are a waste of money.  Most domain investors were like me. In a sit and wait mode and merely came for a laugh.  New gTld owners aren’t laughing and they need buyers now.  It’s the reason they came to the show,  to convince us that we need to be part of the new names………now.  Some took the approach of “watch us and join when you’re ready” method.  And then there was Fred Krueger.  In Fred’s exact words “Dot Com will be dead in 10 years”.

As you can imagine his words caught the attention of the panel and the audience.  Not one to hold back words, Adam Dicker had the microphone queued up before Fred added the time frame of death to the end of his sentence.  Immediately the session took a more interesting turn.  People went from taking photos, reading their email, and slouching, to setting everything down and sitting straight up.  Of course Fred really couldn’t give a reason why they would die other than to say how strongly he felt and how much money he had invested in his new gTLDs.  And then I knew he was over invested and had the passion blinders on.

Passion drives us to our goals. It takes that passion to keep the the motivation and hours needed to get there.  Add in a personal investment and you are all in.  It becomes “I will not fail” attitude.  Often you become so invested in your journey and goal that all those who get in your way become the bad guys.  Your goals become more than just being successful, but to trying to take out your competition along the way.  Regardless if they impede your progress or not.  Fred Krueger and Rich Schwartz are on the opposite side of the new name battle but are both “All in”.  And in my opinion are both right in their opinions but are dead wrong about the success of their “opponents”.  Their opponents will succeed as well.

This name expansion is not an either/or situation.  Both can succeed despite the antics and words of those that are invested in only one side.  The headline statements like the said one above are merely trying to convince themselves that their investments are the right investment.  While neither probably need others to say they are making a good move, they have earned their money by making decisions and sticking with them, but it’s human nature to want to have others say “you’re right”.   And they are both half right in my opinion.

So how do I know they are half right?  Because I went to this same session 20 years ago and I know how it played out.  Yes, in the late eighties and early I started getting involved in trading.  As I got out of college I went and worked in the Chicago Options Exchange and the Board of Trade.  At that point in time things were changing.  It had been dominated by corn and beans, bonds, and over at the Options Exchange, big stock options like IBM and the indexes.  The pits were large.  Tons of actions and large spreads for the market makers.   But the exchanges wanted to add more stocks, add more things to trade like soybean oil, soybean mash.   The more things that could be traded, the more money that could be made, in theory.

Not everyone wanted these new additions.  They were afraid that that things would be too spread out.  That money into these new things would come out of things that were presently being traded. Brokers and money would move over.  It was similar to the new TLDs in that some investors were asking for options to be opened in new stocks despite the known initial low volume.  The exchanges knew they needed to expand to attract new investors.  As a new trader I was glad to see the expansion. The pits were so crowded I couldn’t get a trade because the good old boys got all the fills of the orders and I got scraps.  And you could trade on computer back then but the orders still went down to the pit so there really was no advantage.  Adding new things to trade would give me a chance to move over and be in a less crowded pit and be part of the “new” crowd. Sure I wasn’t going to make the money of the big pit but at least there was a market that I could make SOME money.

The old boys told us we would never make as much as they were in the old pits and chastised us for leaving.  The new pit books and brokers told everyone that they were the future and the old pits would die out as the old guys retired.  They were all right but not because of their reasonings.  It changed because something they didn’t see.  It all turned into computers.  Computers killed the exchanges.  There are still people down there but not like it used to be.  But they all made incredible money because when the exchanges went public they all sold their seats (memberships) for millions. Both old pits and new pits.  Anyone that was involved at bought a seat in the 90s or before did fine.  And in my opinion this is exactly how this is all going to play out the same way in domains.

Those that are invested now are going to do well.  None of us know the future of our industry.  To say that dot coms will die or that new tlds won’t be successful is being naive.   All of it will die as we know it at some time but we will most likely all be rewarded for our investments.  I know that the new tlds in general will be successful.  I also know that it will take a lot of time.  It will most likely take a slow build, a new generation,  and new money to come in, to slowly build the numbers.  Many of them new tlds will not work because they can not wait. They will not have the financial resources to hold on long enough to let the new money come in.  gTLDS will not be taking money out of the hands of premium domain owners.  Much like it didn’t take the money out of the people trading Soybeans.  The person buying SherlockHolmesBook.Club was not going to buy a premium name.   The person that owns CountryClub.com is going to get free traffic for life from the owners of Country.club.   This is not a case of old Las Vegas.  Where a new Vegas was built away from the original so now it’s simply a historic visit to the old clubs.  No, the dot com owners own the whole strip and they merely tear down an old hotel and build another one.  The new gTLDS are expanding the main strip and merely need a little map to get their until everyone memorizes the route.

So while this is a whole post of analogies, you get the point.  To take a hard stance on either side means to me that you are heavily invested financially and emotionally in your position.  Mike Berkens and Frank Schilling are by far the best positioned players in the world because they are heavily invested in BOTH sides. There is a reason why Frank Schilling is where he is and this conference proved why.  He has the financial means to wait.  To let this play out.  He is making money on the old AND the new.  There is money to be made in both and no amount of headlines and shock statements of opinion is going to change that.

24 Replies to “Fred Krueger “Dot Com Will Be Dead in 10 Years”: One Side of Over Invested Blindness”