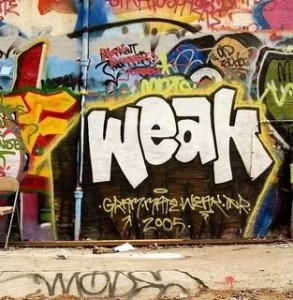 “Hey Rick what do you think of this domain?”  was the email I sent to Rick Latona.  The response…… “I don’t see any value”.   It was right there I knew I had paid too much for the domain.  It’s not that Rick always gets them right but if you want a straight forward answer he’s the guy you ask.

It was several years ago that I attended a namepros live auction at their site.  I was excited.  I already had a ton of plant domains but I was just getting into flipping and had put $5,000 into a “domain fund” to start me off on my way to riches. I had recently sold a site for $75,000 and the money was burning a hole in my pocket.  There were a few names I liked.  A few four letter dot coms, a few generics.  There was one I really liked,  weak.net.  I was into building websites and I thought the name had “cool website” written all over it.  I bid and won the name for $1500 or so.  I contacted the owner after the auction and asked where to send funds.  He then proceeded to let me know that it didn’t meet reserve.  I had seen that there was a reserve on some names but thought for sure I had paid enough.  The owner said he wouldn’t let it go for less than $4K.

This is where I start to black out.  I have no idea on earth why I did,  but I offered him $3K for the name and of course he took it.  Now to this day I still believe that the name is worth what I paid for it but I knew 5 minutes after I bought the name that I would have trouble getting my money back for a few years.  It’s not a term that you can monetize and it’s a dot net.  I figured Scott Day and Digimedia owned the dot com and as one farmer to another (he was watermelon and I, trees) that he would gladly come and hand me $10,000 for my troubles some day.  Well……I’m still waiting

I’ve held on to the name to remind me to think before I act.  Also because nobody has offered me over $1000 for it.  I like to pretend it’s only for the first reason. My gut reaction cost me 3 grand in cash flow.  As a former trader, my ability to take loss is unparalleled.  I lost my financial backer one time because I held a trade to the tune of a $50K loss.  That was in 3 minutes.  He hadn’t commended me for my $110,000 profit on my trade earlier in the day.  He was pissed I took so long to move.  As I explained in a post yesterday, I also lost $150,00 in one trade in a few hours.   I had taken $2,000 and at the time had it up to $250,000.  My goal was to make it into a million in one year and write a book.  I had been writing every trade down and only had one more successful trade and I would have my million.  I put in a stop that left me with $100 grand if all hell broke loose.  It broke loose and I was done.  I took my $100K, got a little sick to my stomach, and then moved on with life.

The bad domain purchase gave me the same feeling as the trading loss. It was a hell of a lot less but the principle was the same.  I did something I knew better but I wanted to play.  In life you have to take risk to make money.  The better you become the better you judge risk.  Then there are times you let emotions get to you and jump too quickly.  The result, I made a “weak” buy and I lost money (or probably will loose money).  So there, there’s the first of many of my many fail stories.  I hope all the rest I share are from the past.