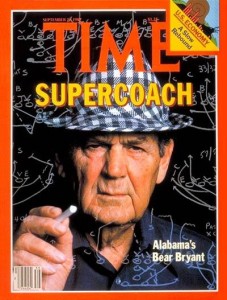 When I first got into domain names I used to buy up celebrity names and hold them.  I’d buy my favorite singer or some good looking actress and put up a fake fan page and try and make some money.  It’s no longer my “style” and dumped all my names many years ago ( I think I may have one I couldn’t sell) but a name came up that I absolutely HAD to have……….BearBryant.net

Although northern born, I was southern raised.  My father moved us to Tuscaloosa, Alabama when I was 6 years old and we stayed until I was ten.  That was during the seventies and in the seventies there was no bigger thing than Alabama football.  The leader of the legacy was one Paul “Bear” Bryant.  The legendary houndstooth hat and the swagger of a coach that expected to win every game……and he almost did.  As an impressionable kid he was my hero.  I had the pleasure of meeting him a few times as my Dad’s friends were coaches of various sports at Alabama and we would attend the same functions as Bryant.   Then and there I said that I would attend the University of Alabama and always wanted to live in a university town.  And I did

Eleven years later I graduated from the University of Alabama and had the time of my life.  It was everything I expected and couldn’t have made a better decision.  Later in life I looked for a university town and found one here in Champaign/Urbana.   Again,  my childhood decisions turned out to be wise.  So this brings me back to the domain.

A few weeks ago BearBryant.net popped up on one of the drop lists.  As soon as I saw it I put it down on my alarm clock to bid at the last minute.  If I am serious about a name and there are no bids, I don’t put mine in until the last minute to make sure the domain doesn’t come up on the “active” lists and this one had no bids.  If someone else bid on the name I was going to have it.  I was going to buy this one no matter what.  Fortunately nobody else had the same attachment to Bear and the domain was mine with no other bidders.  In a few weeks it will become a new email.   My fraternity brothers and my family are all going to be soooo jealous.

Eventually I plan to put a real tribute site to Bryant.  Perhaps people celebrating the legacy of Bryant through their clothing, cars or collectibles.  I myself have a 1976 diesel Mercedes with Houndstooth roof that I got in college.  It still sits in my grandfather’s garage.  He let me use it during college and it certainly drew attention.  Every football game there were lines of people waiting to get a picture with my car.  I’ll have to dig up a picture some day.