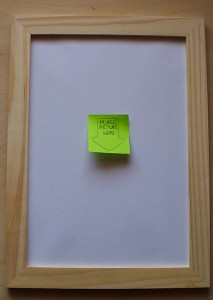 I’ve always been lived by the motto “Start Local”.  I will always start by trying to purchase what I need from local businesses.  I own a local business and wish everyone would approach their purchases in this manner.  The reality is that many businesses can’t offer me anywhere near the pricing and selection that I can find in a larger city or the Internet but I try.  If the price is close then I’m willing to spend a little more money because I would love the money to stay in town. The more I spend the better the chances of that business being able to offer better pricing and more selection in the future.

In addition to shopping locally, I also don’t mind talking to other owners and sharing ideas to improve our businesses.  I’ll even go as far as making a phone call or even stopping in to ask a few questions.  Exchanging ideas always leads to positive results for both parties.  So when I was on Namejet and came across FramersMarket.com I immediately thought of our local framing shop in town called Framers Market in Champaign.  Obviously they didn’t have the dot com so I checked to see what they were using. Their site was using the dot net.  I made a call to the shop and planned on talking to the owner about seeing if he wanted the name.  I had no interest in making any money, merely finding out if he wanted me to bid on the name for him or if he wanted to join Namejet and get the name himself.  When I called the store an employee told me the owner wasn’t in and that he would call me back.  I left my name and number and a brief description of why I called.  The employee got what I was talking about because she said she thought getting the dot com was a good idea.

Nobody called that week.  I figured I would go ahead and put my name into the auction and get it anyway.  Maybe he forgot or just didn’t make the time to call back.  Like all Namejet auctions a few other bidders jumped on the bidding merely because there was already a bid on the name.  I called the shop back and left my name again.  I had called this time to say that I would still give him the name but there were a few other bidders and it may not be $69 but a little more.  I admit I was nervous because he may now think I be trying to make a few bucks with the latest possible price increase.  I figured I would be able to explain myself well enough that he would know I was only trying to help.  I never got the chance.  He didn’t call back.

I went ahead and participated in the auction and to my surprise someone else bid higher on the name.  I went ahead and decided to bid on it as if I were putting it in my portfolio.  There are plenty of other businesses named Framers Market with the business in LA being older and more established.  I won the name.  I haven’t and won’t call back and will instead attempt to reach out to the other Framers Markets out there. I was even thinking of setting up a quick site that will send you to a local framer based on zip.

On a side note, I did go into the store to get something framed and had a plan that if the owner came and talked to me I would bring the domain up.  Instead an employee told me that the document I had wasn’t worth spending the money I wanted to on a particular frame.  It pissed me off so much I left and had it framed elsewhere.  I couldn’t believe anyone would tell me that my personal items weren’t worth spending good money on.  I do realize that employees will not always say the right things and don’t always reflect the overall professionalism of a company.  That being said,  Framer’s Market is considered one of the best framers in our area.  They just haven’t passed any of the my tests.