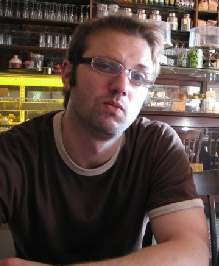 I have had the pleasure of knowing Kurt Kohlstedt since we were both trying to figure out how we could have a little fun and make a little money blogging on the Internet (although he may not be my friend much longer for posting this pic).  What started in 2006 as fun and games has turned into fun and a living for Kurt.    Kurt is officially Founder & Editor-in-Chief of Webist Publishing and Misnamed Media.  Basically, Webist Publishing (WebUrbanist & WebEcoist) is a communal set of publications co-authored by people from around the world. Misnamed Media (Dornob & Gajitz) is a pair of more niched publications, each with their own primary author. They are,  separate-but-parallel sets of publications all focusing on innovation in design – whether that be art and visual culture (WebUrbanist), home, interior and furniture (Dornob), innovative gadgets and technologies (Gajitz) or green living and sustainable design (WebEcoist).  Kurt is a great story because he did what it takes to achieve success.  He works 80 hours a week or more and constantly strives to improve and grow his brand.  Kurt was nice enough to share some of his stories with me and answer a couple of questions that I think can guide or inspire you to do

How many total uniques and pageviews do your sites get per month?

The sites (WebUrbanist, WebEcoist, Dornob and Gajitz [links?]) cumulatively see about 2.5 million visitors a month and over 6.5 million pages are viewed between them – modest by some measures but more than enough for me.

After your first month, how many uniques did you have?

This number has gone up with each site launched – it helps to have existing readers who are eager to check out a related publication. WebUrbanist was first and started slowest – it had maybe a few thousand visits the first month, though over half a million monthly by the end of its first few months. By the time Gajitz was launched, it was much easier to make that few-hundred-thousand mark in thirty days.

How did you come up with the name weburbanist and how important was chosing the domain name?

WebUrbanist may not have been the best choice, but that is always easy to say in retrospect. As a (British) writer from The Guardian [Link? http://www.guardian.co.uk/technology/2009/jan/19/netbytes-weburbanist-pictures ] pointed out, the word ‘urban’ means more than just ‘urban design’ or ‘street art’ to a lot of people – it can cover things like hip-hop music, which are not covered at all on the site. Would I go back and pick something else? Probably not. The site covers urban design, architecture, guerrilla art and so forth – and though ‘web’ might be a bit old-school now, well, perhaps having that usage ‘date’ the site a bit (and mark it as an established publication) is not so bad.

I noticed your new names are misspelling or odd spelling of names.  What’s the reasoning behind this?

There are, roughly speaking, two camps when it comes to domain names: real-word ones and brand-worthy ones. Sure, there are cases in which real words  become brands – and certainly there is a great deal of value in having real words when it comes to search engines – but at the end of the day most short real-word domains are off the market or absurdly expensive. Gajitz gets the point across despite being a misspelling. Dornob (particularly the lowercase: dornob) has a nice visual symmetry, is humorous, but also makes sense with the niche. Would I rather have Gadgets.com? Maybe, but it is also generic – great for search, but as a brand maybe not. DoorKnob.com? Almost certainly not – if I owned it I would redirect it to dornob.com. In short: they are short and memorable, relevant but unique. I am quite sure that Digital-Photography-School.com (run by the web-famous Darren Rowse) gets a boost for having those keywords in the domain, but personally I prefer shorter, easy-to-type and simpler alternatives. That said, his very same (semi-general term) ProBlogger.net is a pretty nifty domain I would be happy to own.

Do you have any employees and at what point did you realize you couldn’t do it yourself?

I work with a half-dozen or so people at this point – an array of short- and long-term freelance writers and contracted coders, many of whom were friends first before becoming colleagues (and thankfully remain so despite my 3 AM calls for help). In the early days particularly I had to beg for tech assistance because I simply did not have the funds to pay for it – though this also forced me to learn a lot for myself. In terms of the authors: having even one site beyond WebUrbanist was more than I could manage writing-wise. What folks on the outside do not always realize is that there is a great deal to be done outside of simply researching and writing  – monetization, marketing, design and tech upgrades all take time (and more time with more sites of course, even if they are parallel or similar). Of course, some people take a more hands-off approach than I do to some of these things, but I’m a believer in the ‘every little bit counts’ adage. Fortunately, the first writer (Delana) to start on the sites aside from me has stepped up to take on a lot of the day-to-day tasks that were making my work weeks eighty hours or longer at times.

I knew you when you were barely scraping by.  At what point did you realize I might be able to make a good or at least decent living doing this?

You sure did – and were one of the first people to extend a hand and show me the ropes. Without you and others like you I could not have made it this far. I set a goal for myself toward the end of graduate school: make X dollars per month within three months or give up and get a day job. X was a very small sum of money, but enough by my calculations to survive on. I hit that mark and kept going. At one point, I almost ditched (or at least compromised) my independent efforts by taking a (still web-related) day job that in retrospect would have been a big mistake.

Where does most of your traffic come from and how did you build the traffic up over the years?

Most of the traffic is direct, followed by search engine visitors. As for referral sources: a variety ranging from the usual-suspect social networking sites (Facebook and Twitter) and similarly most-popular social media sites (Digg, StumbleUpon and Reddit) to various sites in the same or similar niches of course.

Do you think someone can build a web portfolio of your size without social media?

I know they can, based one sites I have seen succeed without it – but they are few and far between, and of a very different nature typically. I think that it becomes harder and harder over time to build a successful site without the help of social networks and/or mainstream media in some form or another. There are a lot of people vying for attention on the web – and it is easy for sites (even ones with stellar content) to remain unfound forever. That does not mean you have to build a set of social profiles yourself necessarily. In fact, many sites get ‘discovered’ by someone else. I was, for example, the first Digg user to get one site in particular to the front page that has since gone on to have over 10 million readers per month. I do not think the individual who runs that site even realizes that – I have certainly never talked to them, I just found their site and recognized it instantly as amazing.

If you had one piece of advice to give someone starting a new website what would would that be?

Know your goals. If you want to make mad money, great, pick a high-paying niche and let your passion for dollars fuel your adventure. If you (like me) are less obsessed with cash and more interested in some particular kind of content: do not worry too much about the bottom line at first – monetization follows good content.

Personally, I have found affiliate programs to be a complete bust – the content on my sites is simply not niched in that way. Vertical ad networks that target demographics work far better in my case – as well as a limited amount of self-service advertising (e.g. BlogAds) and direct sales. My sites are less about highly-specific objects or topics – they do, however, appeal to particular audiences.

Do you do any type of search engine optimization? If so do you mind sharing?

Not directly per say. With these kinds of sites it is, I think, better to let the organic traffic come, well, organically. That is not to say I do not track search traffic and the keywords by which people come to the sites, but most of the high-search-traffic articles simply became popular resources on their own, received backlinks as a result and thus made their way to the top of the pile on Google and other engines. I always advocate the three-prong approach to web writing: write for readers first, social media visitors second and search engines third (though the order can vary). After all, your readers are the sustainers of the site – the people who really enjoy the content and come back for more. The social media users (who in many cases are readers as well) can help you reach new audiences. Search traffic might be the most valuable in a monetary sense, but it comes naturally after the other two.

Do you have any sites you aspire to be or mentors that guide you?

Perhaps not the former – I prefer to make my own way – but the latter absolutely. You are one, as is Alex of Neatorama, Avi of DarkRoastedBlend and others like you and them who I for the most part met early on – but also some newer additions based on more recent launches, like John of Furniture Fashion. I could go on – the list is long – but those are a few good examples, and all people who are blazing new trails on the internet in their own interesting ways.

What are your future plans for you and/or your websites?

If 2007 was the year of starting up, 2008 was the year of growth and 2009 was the year of expansion, then 2010 will be the year of stabilization. It is all well and good to have popular and successful sites, until of course you realize that they need to be streamlined, sped up, redesigned and so forth. This year, I am hoping to finally take more than two consecutive days fully off for the first time in three years – and by the end of the year to be on solid ground in terms of back-end tech, site hosting, idea management, ad serving and all of those less-than-glamorous essentials. If those plans sound modest, well, perhaps they are – but there is something to be said for the important phase that comes in the aftermath of a great period of growth. At the end of the day, my most peaceful and favorite time is simply getting back to writing.