Yes, I put them down to be different and silly, but I there’s also other reasons.  One, everybody puts down the same things over and over.  People give out awards and titles like they’re candy.  Go to a bank and see how many Vice Presidents and Presidents there are.  Jr. Vice President, Asst. Vice President, Senior Vice President, Vice President.  You’re either a Vice President or your not.  How in the hell can there be 40 Vice Presidents?  But you get the point.  Also, as a business owner you don’t really get many awards unless they are Humanitarian. I’ve given lots of money away over the years but it’s never been on purpose so nobody is going to give me an award for that.   Or you bribe your customers to vote for you in the fake “Best Of” media campaigns. I love my customers so I am not going to inundate them with “vote for me” emails.  I did what most anyone would do and that’s write a script using proxy servers to win the vote. (note to self, don’t win by more votes than the population of your city). So I had a little fun with my awards.  But I’ve been “bragging” about these awards for close to 40 years because they are what defined me and showed a glimpse of why I am who I am.  I have two of the trophies still sitting on my desk at home (I’ll add the pictures to this article a little later today)

The first award was 3rd Place Optimist Club Shootout.  It was actually the Wendy’s Optimist Club Shootout but I didn’t want to brag and throw big business into my big 3rd place finish.  The competition was simple.  Get a bunch of 7 to 10 year olds to shoot baskets and raise money.  We got 60 seconds to make as many baskets as you can while getting donations per shot made.  I went all over the neighborhood and gathered signatures and promises to pledge.  Mose people gave a nickel or a dime but a few gave a dollar.  They figured I was an eight year old, how many free throws could he possibly make in 60 seconds.  Except I had a plan.

I remember it pretty clearly.  Each kid steps up to the free throw line, shoots, gets his ball and runs back and shoots again.  They were making 6 maybe 7 shots in 60 seconds. I think I might have seen somebody make 10.  My turn comes up and I walk right under the basket and take my position.  The guy tells me “You need to go stand at the free throw line”.  I turned to him and said “It doesn’t say anywhere that you have to shoot free throws, it says “shots”. “This is where I’m shooting from”.  Long story short, I was right and off I went.  I did the layup drill they taught me in practice.  Where you shoot with one hand, it comes out the net and you grab it cross over to the other side and shoot it there. The momentum keeping you moving.   My final total?  Somewhere in the 30s.  It WAS over 30 years ago so I don’t quite remember exactly but it was more than double anyone else.  Of course the few kids left after me switched to the layups but they hadn’t been practicing like me so I won the total shots made part of the contest. Of which the award was nothing.  But this was a fundraising contest, not a performance contest.  I still had to collect the money.

Collecting the money turned out to be a problem.  See, the number the neighbors were using to calculate their per shot donation turned out to be a little off. The were thinking times 10 not times 35.  The people that donated a dollar per shot refused to pay.  I ended up getting a lot less than pledged which led me to a third place overall finish. I can’t remember the amount raised but I do remember being pretty proud.  And I got a very nice trophy for my efforts which is all that mattered at that age. Actually any age now that I think of it.  The real reward was I knew early on that you have to take a different approach to things if you want to succeed.  Don’t follow the lemmings.  Figure out how to do it your own way and if somebody tells you that you can’t, ask them why.  If they’re answer is because that’s not how we did it in the past, then ignore them and keep shooting.

I might be even prouder of the second award.  The Mr. Hustle Award.  Yes its a real award.  I didn’t realize it’s real meaning for decades to come.  It too is sitting on my desk at home.  I was given this by the coach of my youth basketball team.  I loved basketball as a kid.  But I wasn’t that good.  I really couldn’t (and still can’t) dribble with my opposite hand.  My shot was good but there was no three point shots back then so I was taking 2 point shots 25 feet out because I had no inside game.  But I loved the game.  I worked hard at every practice and every game.  I put a lot of effort into defense because that’s what I did best.  Shot when I was wide open, and passed it off when I wasn’t.  I wasn’t the guy that was relentless on defense and acted all crazy, I just never gave up and ran from end to end, from start to finish.  Awards were given out at the end of the year for the team and the team MVP.  I got MVP for my soccer team almost every year but I had no chance of getting it in basketball.  But at the end they gave me the made up new award,  Mr. Hustle.  I wasn’t at the awards ceremony but one of my parents gave me the trophy in the car one day.  I really didn’t know exactly what it mean then, I just know it was a big trophy and like I said above, I loved big trophies.  But I know what it means now.

To me it showed early on that if you work hard at something, regardless of the talent level, you will benefit in the end.  I tell me daughter today to not give up.  If you’re tired, feel frustrated, or don’t feel like you’re any good at something, finish it out.  You’ll learn from it.  It may that you never want to do it again. It may be that you need to take a different approach, like training more, studying more, researching more. But if you are going to commit to something you hustle.  Even as a kid I worked hard at what I did. Even when I wasn’t very good.  I still do it today.  I admit I avoid things I am terrible at but if I do something, I still try and hustle.  And my trophy reminds me each day.

My last award is just bragging.  Everyone has to be the best at something at some point in their life.  It may be the best rock skipper, the guy that can actually drink a gallon of milk, or a billionaire.  But everyone needs to feel that level of success.  When I was 7-10 I was as good of a player as there was in the state.  It was what I was known for.  I was the best soccer player most had seen at that age.  I could score at will, until someone told me to stop.  Eventually the other kids caught up and I was a just a good to great player for the next 10 years.  No longer the best but I had my day. Being picked first at school at gym had meaning back then.  Being the best dodgeball and kickball player in school was a reputation builder.  While it has no direct bearing on my work or my life, it did give me a taste of being the best at something.  A goal I still try and reach today. I realize that there will always be someone better than you at whatever you do but that’s no excuse for not still having the goal.  And no matter what they do better than me I just ask them the simple question ” I know your company is worth 200 million but did you ever score 59 goals when you were 11?”   I didn’t think so 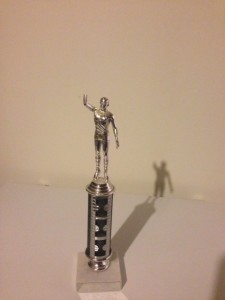 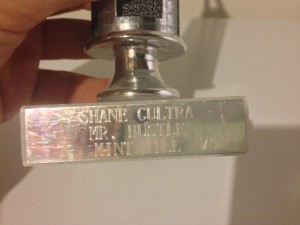