Seven hundred thousand dollars is a heck a lot of money.  For that kind of money you can build quite a business on an $8 domain name.  The buyers of the domain Cat5 were buying more than a domain name.  They were buying a company.  A company that is built on Google giving more juice to keyword domain names and in my opinion, even at those rates, a fair buy.

Runningshoes.com is on page one, 5th result, for the term running shoes.  A huge, ever increasing search term.  They appear with the big boys in the shoe/running market Roadrunner sports, running warehouse, and runners world.  All companies doing tens of millions of dollars worth of business.  For a mere $700,000 Cat5 has become a top 5 player on the internet for running shoes. A market that is growing at 4% a year despite its massive size.  According to the Running Industry.

SGMA (2) reported $3.35 billion in running footwear sales, up 6% in 2009. While total athletic footwear sales dropped -0.8% across the board, running shoes topped the list and reported the highest percent gain for 2009. The only other athletic footwear category to report an increase was outdoor/adventure shoes at 4% for the year, while all others reported a decrease. Running shoes are projected to increase to $3.49 billion (4%) for 2010.

The days of typing in domains are slowly coming to an end with most people starting their search with Google. The result is that the ranking of the domains in Google is as just as determinate of price as the domain itself.  If the domain is also a generic keyword then it just multiplies the value.  The amount a company is willing to pay to for existing ranked generic keyword named businesses is growing each day.  Advertising on a national level is not cheap. The cost of a 30 second ad on prime time television is over $100,000 not counting production cost.  Paying $700,000 for a site that comes up first page for the 137,000 monthly searches this keyword receives each month is not preposterous .  According to Chikita research runningshoes.com should get 5% of the traffic at the 5 position (see chart below) . That would mean they would average 6800 clicks a month from their rankings. 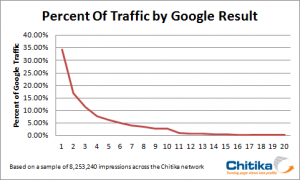 At a CPC of $2.12 for running shoes they are essentially getting $12K a month in free advertising and that is just for the term running shoes.  I imagine there are many other terms they rank well. An $8 domain will not rank on the top page here no matter how much money you spend as long as Google keeps up it’s current algorithm.  In order to gain customers you will have to buy adwords.  At $2 dollars plus per lead you have a much tougher road ahead.

So before you dismiss the big price paid for the domain you have to look at the relative cost it takes to start making money in the running shoes sales market.  For someone that wants to have a chance to make money right away, it doesn’t get much better than this.  Most people who say the cost was too much either don’t have enough money to understand or simply don’t realize the costs of instant access to a billion dollar market.  I think it was a fair price and will actually be considered a great buy in 10 years.

9 Replies to “RunningShoes.com Proves Yet Again, There is Huge Value In the First Page of Google”