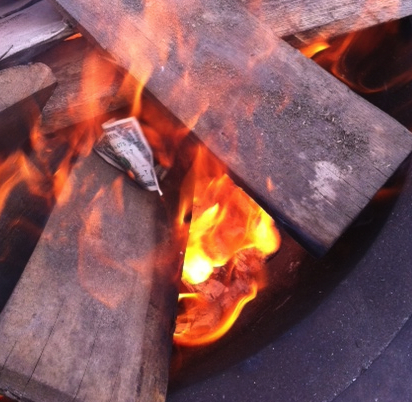 It’s the dream of almost every working person. The day when you quit your job and start working for yourself and tell your company ‘Adios’. We read daily sites like TechCrunch and AVC dreaming of owning a startup and cashing in the millions. But there’s a reality that needs to be faced.  Bills.

When you have a regular paycheck it’s easy to forget the cost of our daily lives.  House or apartment, health insurance, gas, food, phone, tv, and tens of other monthly requirements.  Take that weekly check away and you soon find out what your personal burn rate is.  Your burn rate being how much money you spend and how long until you go through what you’ve saved.  The lower you get that rate, the better chance you have of being able to quit your job and pursue your dream. While you read of seed funding and series B, the reality of it is you’re most likely going to have to bootstrap what you set out to do.  You’re going to be on your own.

There’s a reason that most of the people you see involved in these start-ups are young. Their personal burn rates are next to nothing.  They’ve come out of college used to having nothing.  Scraping up money for pizza and driving around in a 1995 Nissan Sentra is not uncommon when you’re 23.  They have the ability to live on pennies for months on end. When you’re 40 and doing that your friends think you’re an alcoholic. The stories of the father of three with a mortgage and two cars quitting his job to pursue his new online adventure exists, it’s just not that common. When the only person that relies on you and your paycheck is yourself, then the only one that suffers from a bad decision is yourself.

I had the fortune of having my Father invite me to join his 4 old year business at a very young age.  I was able to drop down to an $18,000 annual salary because I really had no roots and no bills.  I brought my fiance’ (now wife of 17 years) and our 1985 chevy cavalier and we rented a house for $300 a month.  She had a great banking job before the move but she too took a job with a new bank as a customer service rep at under $10 an hour.  We were able to make the move and take the jobs with new companies because we had no fiscal responsibilities and our personal burn rate was under $800 a month for both of us.  We could take the risk of no initial pay and had the ability to wait to be rewarded in the future.

If that same opportunity were to be offered today it would be a much more difficult decision. But for us, one thing hasn’t changed.  We are constantly trying to lower our personal burn rate.  It’s no longer to say “fuck you” to our jobs.  We love, some days like, our jobs, but the less bills, the more financial freedom.  We need that financial freedom to take a little risk and build other businesses we’d like to pursue without affecting our financial future. Having no house payments, no car payments, and getting the monthly bills down to the “Big 5” children’s schoolings, insurance, utilities, technology (phone,cable, internet), and taxes.  You either have money to do what you want or you have to get yourself to the point where you simply need less.  Retirement planning and beginning a start-up have a lot in common.  You want to keep your spending low in order to enjoy the fruits of your labor at a later date.

I have no desire or ability to give lessons in lowering your burn rate other than to say take it easy on the upgrades in life. New cars are the worst purchases you can make and most people I know get a house way too big for what they really need.  That advice alone will save you tens of thousands.  If you are young, do it now.  Do it while you have the chance.  Take the risks , do what you want to do while you have that financial freedom.  For those with more responsibilities ?

Start by doing it on the side and see if your idea has traction.  Initially make it your hobby and build from there.  Build up to a burn rate that enables your spouse’s income to fully support your family.  Ray Kroc built McDonalds in his 50s but there’s a reason that’s one of the few stories you here about post 50 people building new companies from scratch.  Because it’s difficult.  No health insurance, losing the best income producing years of your life, and reduction of nest egg rather than building.  All reasons why working for someone is a nice, secure way to go through life.  But for those that want to avoid the “I wish I would have”, get your ass going while you still can.