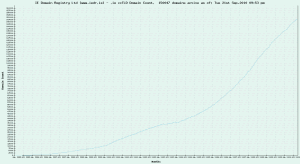 The Internet is a beautiful thing.  It takes this giant world and condenses it into this nice little package.  Things that seem so far away are in reality now just a click away.  On the other hand, sometimes you find things and people that you had no idea live right next door.

I was trolling the Internet looking for domain names and it brought me back to one of my “want to own” domains, Champaign.com.  A domain owned by Dennis Toeppen.  I knew the name.  He owns a bus line here in town and the domain forwards to that address.  I had never really done any real homework on the name but knew that the domain wouldn’t be cheap so I figured if I ever had any “real money” I would contact him.

So last week I decided I had enough money to consider making an offer on Champaign.com and called one of my daily running friends, Joe Murphy.  Joe and I run together almost every morning.  He’s a lawyer in town and specializes in communications which used to be the telephone industry,  but obviously has evolved.  He’s lived here his whole life and knows every single person in town.  I figured I would get background on the owner. Joe and I mostly shoot the bull (OK I do most of the talking) and Joe usually can’t say much because of confidentiality agreements but I decided to ask him if he knew anything about Mr. Toeppen.

When I asked Joe, he gave a little chuckle.  He laughed because Toeppen is/was Joe’s client.  It turns out that Dennis Toeppen is/was a big time domainer.  In the mid 90’s Toepen bought hundreds of domains.  He bought lots of generics but he also bought approximately 250 domains that were the exact match of many large corporations.  He spared no one, he bought the biggest and the best.  Now remember, this is 1995 and it’s the wild west out there.  There had been no precedents set as to who holds the rights to these things.   The first to question Toeppen is Panavision.  Toeppen owns Panavision.com and tells Panavision that it’s a visual tribute to Pana, IL.   A little town here in Illinois. He offers to sell it to them for $13,000. Panavision doesn’t buy the name or his rationale and takes him to court.

Here is how Mr. Toeppen described his early domaining career

It was clear to me at the time that domain names were valuable, undeveloped virtual real estate. There was absolutely no statutory or case law regarding trademarks in the context of Internet domain names at the time. It seemed to be an excellent opportunity to do the virtual equivalent of buying up property around a factory — eventually the factory owner would realize that he needed the scarce resource which I possessed.

I sat on my virtual real estate and waited for offers (and threats). Many even-tempered folks purchased domain names and went on their way. Others sued me. I litigated two domain names because I wanted to determine if a domain name holder is legally bound to turn over a domain to a trademark holder.

Unfortunately, Federal Courts sided with trademark holders in Intermatic and Panavision. Rather than accepting my real estate analogy, the courts likened my actions to taking a lollipop from a defenseless toddler. Shortly after the courts ruled against me, I abandoned all domain registrations corresponding with trademarks.

The Panavision and Intermatic cases formed the foundation of modern Internet trademark law. Unfortunately, both unreasonably favor the trademark holders.

It’s worth noting that a well-known letter which I sent to Panavision in 1996 was not actually a demand, as it was characterized by Panavision’s attorney. Rather, it was a response to multiple unpleasant phone calls and phone messages from a particular individual at Panavision. Of course, it is the job of one’s attorney to transform objective reality into something more melodramatic and exciting than it really is. Panavision’s attorney was adept at spouting melodramatic language. If only he was not opposing counsel!

My friend Joe becomes the legal counsel to Toeppen and little did they know, they would become legal precedent for the future of the Internet.  They lost that case and as Joe described it, pretty badly.  They lost a few more and eventually Toeppen realized that he was going to lose all his cases and dropped all the trademarked names.  Turns out when looking back in history, Dennis Toeppen is the original cybersquatter.  I still find it amazing that after all this time domaining and and living here in Central Illinois that I didn’t know the story and even crazier that one of my good friends took part in it and really hadn’t brought it up.  He’s done a little legal work for me on the sale of websites and had mentioned he had defended some cases in the 90’s but had no idea that he had defended THE case.  Joe is as intelligent man as I’ve ever met and know doubt he had virtually no chance of winning, but to this day he seems a little disappointed he didn’t do better in those cases.  Even when given a virtually impossible case, it seems lawyers still want to win.

Despite the losses, legal and financial, Dennis Toeppen did incredibly well.  Here’s a non updated list of some of his domains that he had for sale (he owned many more than this but were never listed)

This list hasn’t been updated in years but regardless, he owned all these domains and a few more.  I will point out that Toeppen did win his GEO domain cases, namely Monticello.com.  He bought all the local town names around here and Monticello is a quaint old community 30 miles away.  In 2003 he was sued by the Monticello Group and won (unfortunately Joe wasn’t on this one).  It helped set precedent that city names couldn’t be trademarked and allowed private individuals to own lots of cities, states, and towns.

I don’t know Toeppen, never met him,  so I can’t judge him personally.  I do think he’s brilliant because he saw the value of domains and what they meant to the future.  As Joe said, it’s easy to look in hindsight and say that registering those names was stupid but you have to remember this was a completely different time.  Just because the street was named McDonalds didn’t necessarily mean that McDonalds was the only one that could own the street.  At least that’s what they thought at the time.  On the other hand, I have heard many a story about Dennis Toeppen.  Stories from people I know well.  They all say he can be an ass.  You know the kind of guy.  He actually knows more than you and treats you as such.  The kind of person that you insult by offering less than what he deems the value.  I’ve heard this story 5 or 6 times now and while nobody like to be treated like an idiot, this is also the kind of response that makes you millions.  When someone offers you $10,000 for a name and you act like he has embarrassed himself with that offer.  A “come back when you have real money” type response. On the non business side, I’ve heard he’s a very nice guy.  A guy that used to like to get outside, to exercise, to fly his plane,  and hang with friends.

I’m going to get in contact with Dennis over the next couple of weeks because I would love to hear his stories.  It’s not often you get to sit down and talk to a true pioneer.  Pioneering that made him a lot of money and notoriety.

8 Replies to “The Original Cybersquatter Lives Right Down the Road”