Posted on February 1, 2010 by ShaneCultra

If imitation is the sincerest form of flattery, then taking your stories and building a site around them must be lust.  There are many ways to make a website.  One, you can write your own content and post it for the world to enjoy. Two, you can put up an aggregator and compile RSS feeds and create a site using those feeds.  Sites like Domaining and Nambee are great examples of the latter.  They actually do me a favor and I am privileged to be on their sites. In exchange for using my content to create their site, they send over nice amounts of traffic when people wish to read more of the story.  It’s a win win situation for both.  Then there are the other sites.

As a site owner I put my RSS feed out there as a convenience to those that want to read my site at an easy to manage location.  I don’t put it out for other domain sites to publish my entire story and use it as daily content for their site.  Sure there is a link but after hours and hours of writing, a link just isn’t enough.  I usually email the sites asking them to take down my content and occasionally they agree.  Usually they counter with the “I’m giving you a link which sends you traffic and gives you a better PR”.  My content is worth more than that and I could care less about PR or a link from a page with less of a PR than mine.  Often, many sites don’t even put up a link.  I even had one yesterday tell him that if I wanted to I could send him over an article and he would publish directly on his site rather than scrape it.  Because it’s become impossible to police this I was forced to do the following two things to combat scraping. 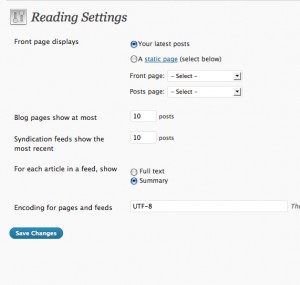 1.  I changed the settings in my “Reading Settings” to summary. That will change my feeds so that the entire text won’t go out, just a quick summary.

2. I installed the “Anti-Feed Scraper” Plugin that takes my feed and puts [postname] originally appeared on DomainShane on [postdate].  It insures a link from a feed.

Neither of these interfere with a Domaining or Namebee type site because those sites only put a snippet of the posts and these two things don’t affect this.  If someone tries to do more it makes it very obvious that it was scraped and lets them know where to go if they want more.  I’d like to put up a list of the scraper sites that steal from all of us domain bloggers but I don’t have time to be the Internet police and my little post isn’t going to make a difference to most of them but my changes in my feeds WILL make it so the readers know where to go if they want to find the original content.  Has it made a difference.  Absolutely, three days into it and I’ve picked up 10-15 more hits from those sites and climbing.  Readers that would not have come if the full story was there to read.  I recommend all bloggers do the same.