Credit Karma had some very interesting information about the correlation between which email domain you use and your credit score.

A credit score says more about a person than just how well they pay back money.  According to Credit Karma, people with low credit scores file 40% more auto claims than people with higher credit scores.  Even the state you live in may make someone judge you without seeing the actual score.  Wisconsin is one of the top states for overall credit score.  And the worst?  That’s an easy one,  Nevada.  Based on a sample of 20,000 credit scores the following data was compiled.  It concluded that ON AVERAGE, people that used Yahoo email had the lowest average credit score and that Gmail and Comcast (bellsouth didn’t have nearly as many users as these two) had users with the highest average credit score.

Before anyone gets offended, this is an average. I am sure there are people that use Yahoo that have a perfect credit score.  I am just saying overall, you are not the norm. I would have loved to see some data that was left off.  Like average credit score of the people that use customized domain emails.  I am pretty sure it would have been higher than all of these.   Customized emails take a little extra work and effort. The same extra work and effort it takes to pay your bills. 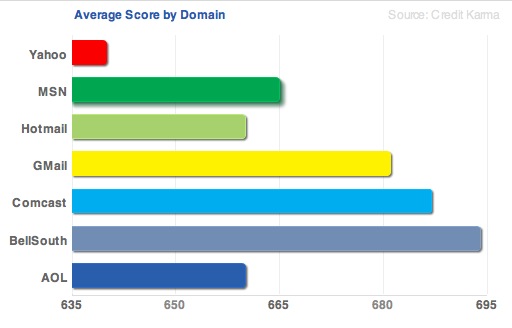