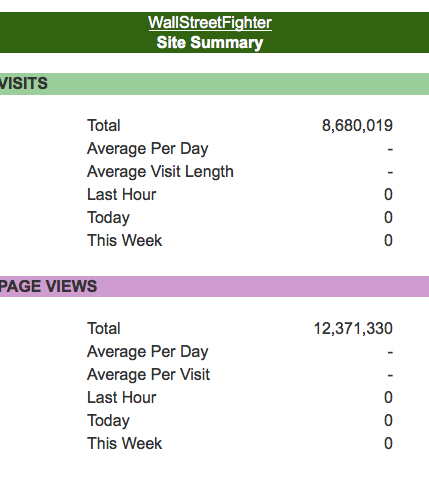 One day in in 2007 my wife and I were reading a funny article I found on Digg.com and I thought to myself, I can do that.  I bet my wife that I could get 1 million people to visit my site in one year.  Not pageviews but uniques.  I decided there were two niches that I knew and would have to focus on, plants or trading.  There were no funny trading sites or sites that showed the fun things you could do with your trading profits so I concentrated on this.  Over the next year I realized I would have to stray from this a bit in order to reach my million readers so I just started writing straight up comedy.  Childish comedy but things that an 18-30 year old male would find funny.  Things like this that eventually would be the top story on Digg and even occassionally make it on “Best Week Ever” and “Diggnation”  I was on both of those shows many times.  Eventually I got to the point that I was receiving a million uniques A MONTH.   Here are 10 things I learned from my experience

1.  Traffic is a powerful and addicting thing: Once you get 200,000 visits in a day you are constantly trying to get it again.  The power it gives you is immense.  I would send over 20,000 hits to friends’ little sites on a particular day just to brag.  It was more than money, it was the thought that so many people actually cared what I wrote.

2. It’s not what you know, it’s who you know. The only reason my site became popular is because some top users on Digg liked my writing.  They submitted my stuff every day.  From there it spread like the plague around the net.  Enough links built and made it into a PR6.  From there it mushroomed. Once I had great traffic I met other site owners of great traffic and we would trade back and forth.  I would get traffic, direct a portion of it to them and they would return the favor.  A big circle of traffic

3. Just because you get traffic doesn’t mean you can monetize it. It took me a full year to figure out how to make $1K a month.  I got a half a million people visiting and yet I barely made any money.  It wasn’t the best of traffic and Digg traffic is almost impossible to monetize but eventually I figured it out.   Traffic from humor and celebrity sites are much lower CPM but eventually I realized who was trying to reach my readers and was able to sell some ads.

4. To make money you have to plan on your site being successful.     I may have said I was going to get a million visitors but I certainly didn’t set my site up to do anything with it.  It was laid out poorly, not at all sticky, and super busy.  The readers always told me what was wrong with the site and eventually other site owners shared their successes with me.  I may not be a quick learner but at least I’m a learner.

5.  If you want people to come back you HAVE to write everyday. Consistency is key to a blog.  I wrote 4 articles every day.   I came up with the ‘theme’ of each post and stuck with it.  Quantity doesn’t make up for quality but with quantity comes occasional quality.

6.  Social media can be very powerful. People make a good living controlling the traffic at social media sites.  I know this because I was part of it.  Digg, Reddit, Slashdot and now Twitter drive millions of eyeballs per day.  People build themselves up as “power users” of these social media sites because of the power that comes with the ability to get it to the front page or in the tweets of thousands.    They are paid well to send it to you.  It may not be payment in cash but they are certainly rewarded.

7.  An ecommerce site is as good as its product and a blog is as good as its writers. I sold my site to Break.com.  They are one of the finest companies I know and I was more proud to sell it to them than I was to get the money.  The problem was twofold.  One, I was no longer the writer (they couldn’t pay me enough to quit the nursery) and two, the theme of Wallstreet and funny faded quickly with the crash.   People came for my personality and once I was gone, I couldn’t get the new writers to keep the same style.  I’m not sure I was funnier than they were but they just couldn’t keep it going.   They took the site and changed it to MadeMan.com.   Jon and the guys at Break were amazing to work with and I learned more in my year of transition of the site into their hands than I had learned the previous 3 years working on my own.

8.  You can’t take user comments personally. When you get a million people visiting your site you better have tough skin.  There are praises for your work but more often there are people telling you how bad your stuff is and tearing you apart.  Articles you spent hours writing blasted to bits.  Comments no longer bother me and I take all with a grain of salt.  I still enjoy the nice comments but I let the negatives slip on by.  Unless they are absolutely true and something I need to improve.

9. You don’t need a good name to have a highly successful blog.  It just has to be easy to remember.  I helped get HotChicksWithDoucheBags.com get started by sending him traffic his first few months.  He later registerd HCWDB.com to make it easier but either way he gets over half a million visitors a month and has successful publishing and production deals as a result.

10.  Originality and Creativity trumps all.  My blog had both………at times.   I did things different and it paid off.  Having your own style and personality on a site will set you apart from the rest.  It really doesn’t matter what it is but if you are going to be successful online you somehow have to have your own flair.  Something to make people remember you.  It could be the layout, the domain name, the logo, in addition to the content.  Something that makes the user say “that’s great” .  Perhaps you’re like Zappos and you can put all the shoes of the world under one roof.  Or maybe you’re like PerezHilton and you can draw on celebrities’ photos.  No matter what you choose it needs to be original and creative.