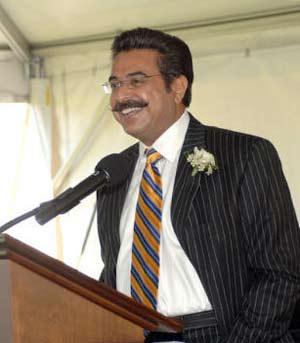 Shahid Khan today announced that he is going to buy the St. Louis Rams football team. Shahid is a fellow Urbana IL business owner and certainly the ONLY Urbana IL business owner that could afford to buy to buy an NFL franchise.  I know Shahid and his family because they love plants.  They want their home and their businesses to always be in bloom and look nice.  As a business owner it’s nice to have customers that want things done right, and no questions asked as to how much it costs.  We all know Shahid had plenty of money.  He bought the local country club and made it his own personal club.  All existing members are welcome to play but it’s his.   So where’s the lesson?

The lesson is this.  There has never been a market more in decline than the United States auto part makers industry.  Over half of all part manufacturers were going belly up and somehow Shahid Khan seemed to thrive and  I got to watch how he did it on a daily basis.   Shahid knew that this market wouldn’t stay down forever so he bought out the healthiest of the other failing auto parts manufacturers.  He saw value.  He got the companies for a dime on the dollar because of the situation in the economy at the time.  I can’t say this for fact,  but there were rumors in town that GM was personally telling him which manufacturers they need him to keep afloat to meet their orders.  A “buy that and we’ll buy from you” type situation.  He was one of the few people that had the borrowing power to do it. Even GM didn’t have the money.  Now things are starting to recover and his purchases are worth hundreds of million, if not billions. His company Flex-N-Gate has revenues of $2 billion dollars a year.   All in the course of a couple years.   So how does this relate to domaining?

Cash (or the ability to get credit) is king right now in domaining.  The second part is you have to be able to monetize these big purchases.  If they fit into what you already do and you have the cash to buy them there is an unbelievable opportunity to build an empire on the net.  Each one of those alone is worthless.  You have a great niche but no money or have money but you have no ability to monetize your purchases are two scenarios that lead you to a path of mediocrity.

Neither of these were a problem for Shahid Khan.  He leveraged purchases in a market he knew would last.  It may not have been strong then but he knew it would come back. Now he is the proud owner of the St. Louis Rams and I will be trading petunias for VIP box seats 🙂

One Reply to “A Lesson in Wealth: Client of Mine Buys St. Louis Rams”