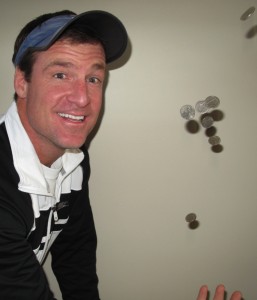 That’s how much money many of my domains have been making a day lately.  They used to return dollars.  I’ve never been one to complain about parking revenue, I’ll take what I can get.  But at a nickel a day, I think my days of making good money are officially over.  My father always says “nickels add up” and they do, they cover registration ,which is more than most domainers can say about their portfolio.  I first noticed  signs last year, a gradual monthly decline in parking revenue that seemed to lose a few 5 percent a month.  So I made a few moves, moves that seem to be the norm.

1. I didn’t renew the names that had minimal resale value and couldn’t pay for themselves parking.   I have a large five letter dot com portfolio and it’s a tough portfolio to manage because it doesn’t have much obvious value but are some great names.  Names like sello, koosy, happa, hooku, flowo all have little real value but I think they are names that are very brandable,  but then there is no more used word to label junk names than “brandable”. Anything is brandable.  I did drop a few hundred names.  Many of the names never were picked up so it shows they were junk, but others were picked up on drops and some were purchased for a few hundred dollars showing me that I am not very good at marketing.  Then again, put almost any name on a drop and it seems to go for more.

2. Put up a few minisites.  These seem better than parking but I’ve realized that I should have started learning SEO first, instead of doing this all backwards. I presently have 10 or so and it has certainly helped, but too early to see if they can climb the google ranks. I’m presently trying WhyPark but with all the customizations necessary (adding better articles and photos) and the sharing of revenue, I’m not sure I can’t set up my own wordpress site and do the same thing.  I’ve become fairly proficient at setting up a quick WordPress site but others may not have time.  Whypark is simple and easy, but you have to pay for it.  When you’re making a nickel, cutting that in half makes it tough to buy the big box of Raisin Bran.

3. Straight up development.  As I look back, this is where I should have concentrated instead of flipping.  I HAD some high traffic sites but sold them.  I sold them and bought domain names.  In hindsight, I sold my sites at the high but also bought many domains at their highs.  I have been “doubling down” this year by picking up some high quality names at a discount, well a discount compared to last year.  My focus this year is to get the new sites up.  I’ve hired designers and coders and they’ve already started working.  Some of the sites already exist but the layout is terrible and thus the need for the new sites.  The positive is that they already rank first page of Google for 20 plus keywords and they are $1 to $10 a day sites.  A heck of a lot better than the .05 in parking

4.  Sell names:   I’ve learned that I need to sell names, names that just don’t fit into my niche but have value.  I’ve purchased some names over the years that are nice names, I’ve had for years, and I’m sure I can sell for profit and cashflow.  Two things that are important in business.

5. Get most of my names to one registrar.  It’s soooo much easier to manage that way.  I’ve lost a few domains because they were borderline names that I didn’t move and shitty registrars like melbourneit.com charge $25 a year.  It’s amazing how hard some of the registrars make it to manage your domains.  Getting them moved is like trying to keep Oprah at a consistent weight, impossible.

I’m very excited about 2010 and it should be a good money maker for me.  I’ve made as much as XXX,XXX domaining in past years.  This year it was low XX,XXX and that just isn’t enough but it’s still nice extra cash.  Now that I look at it, maybe my Dad was right,  the nickels do add up.