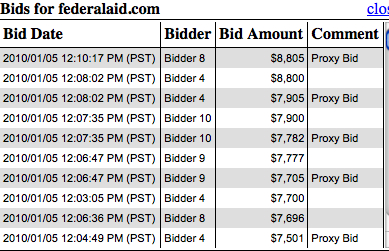 I don’t know who actually flipped it, I only know it wasn’t me. As a constant watcher of Godaddy drops I came across a name I really liked, FederalAid.com.  I always try and set a maximum before an auction starts so I have some kind of game plan going in.  Things changed a little as I sold a name two days before the auction that gave me an extra few thousand to play with.  As usual, nothing happened until the last few minutes and the price quickly surpassed my 5K but I decided I would go to 7K but that was quickly passed as well.

I made the mistake of going to valuate for personal justification (I know, I know don’t do that) and saw the $5300 value and started thinking too much.   I started thinking that my gut feeling that this was a 25K domain was wrong.  What did I know.  I’m just a guy that buys and sells thousand dollar domains.  Maybe I don’t know the difference between a $5000 and a $25000 domain.  I bid it up a few more hundred and dropped.  Two minutes after the auction I was already kicking myself.  I felt I should have taken it to 10K.  Who knows, the winner had a proxy bid that always seemed to kick in so maybe he had a 25K proxy and I never would have gotten it.  I was only mad because I didn’t try.  A few weeks later was started out as shoulda turned into a mental “I told you so”

Three weeks later I saw the domain up for sale at the DomainFest auction and with a 25-50K reserve.  My initial thought what great timing.  A huge auction right after a pickup is a fantastic way to flip a strong name.  That being said, many of the good names were being passed lately in the live auctions.  TRAFFIC had a ton but DomainFest seemed to be a little more active.  Low and behold, FederalAid sold for 40K.  A nice $31,200 profit in 23 days.  Well played sir, well played.

13 Replies to “Coulda Shoulda Woulda: I Watched Someone Else Turn 8K into 40K in 23 Days”