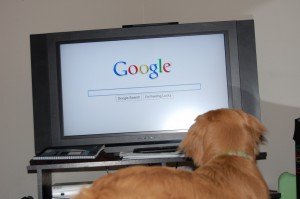 Fred Wilson said it best.  “Don’t Be a Google Bitch” It’s a scary place to be.  Your whole business model based on where you rank on Google.  The majority of your income based on Google Adsense.  You may be surprised how many people are in this position.  Google owns them.  One algorithm change. One perceived click fraud and your income reduced to pennies.  It’s a position you don’t want to be in.

It’s basic business sense.  You never want to have all your eggs in one basket.  Relying on one single entity for income. Many of my fellow plant growers were in bed with Wal-Mart when Wal-Mart decided to make some changes.  Changes that didn’t include them.  Where did it leave them?  Out of business.  It’s the same scenario for many online businesses. They built their site for Google search and around Google Adsense rather than build it for users.  The users are revolting and forcing Google to make changes.  Changes that may not include many of those business models.  They are owned by Google and Google is closing the doors.

I talked to a friend yesterday that does $10K a month in Adsense.  Inexplicably Google instantly closes his account for click fraud.  They used a bunch of other terms and a vague one page explanation but basically they are accusing his site of click fraud.  Now this person runs as straight of a business as anyone I know and I can guarantee he doesn’t click fraud.  Sure, he optimizes adsense, but right on the first page of their recommendations they say you need to optimize. Regardless, they found a problem and shut him down.  No explanation, no answers.  Not only did they shut him off but they kept this months and last months earnings which were in the $30,000 range.  My first thought would be this.  If I have a customer bringing in $10,000 a month (obviously Google is making money off him) why in the world would you shut him down?  It’s not in your best interest to do.  You could say they just wanted to steal the $30,000 but it just doesn’t make sense.  Fortunately for my friend, Google was only half or less of his advertising revenue.  He didn’t have all of his eggs in one basket.  He had a lot of them, but with a little adjustment and switching of advertising, he’ll be fine. Heck, he may even be better off free of Google.  He also doesn’t get his traffic from search.  He had thousands of regular readers that he’s built over time.  He is going to be fine.  He used to work with Google, he was not owned by them.

The point to that story was this.  Google can do whatever they want, with little to no repercussions.  They can deindex you, cut you off and keep your adsense and you will most likely never get a response as to why.  Heck, Epic was deindexed, met with some higher up people and they still never got all their sites back on Google.  Even their poster domain icecreammaker.com moved to Amazon to move away from Google.  It’s a lesson learned for Epik.  They are better and stronger for it.  They have learned that relying on Google is not a good business model.

This story is not about the evils of Google but the contrary.  It’s about not taking the easy way out.  Letting Google do all the work by finding your customers and relying on their advertising is just being lazy. Fred Wilson often gives business advice for new businesses and startups and he says this.  “Search – It is not first on the list for a reason. I don’t think search driven businesses are interesting. Live by SEO, die by SEO. Don’t be a google bitch. But you will notice that many of the top consumer web brands are highly SEO’d. Try searching on a person’s name who is active on Twitter. I bet their Twitter feed will be one of the first five results.  Flickr did this very well. So does LinkedIn and Crunchbase. SEO is something that takes time to pay dividends. But you should build your product day one to be search friendly and keep at it. You can break your SEO with product changes and be careful not to do that”

Great advice. Build a product, a service, a company.  Build it to be search friendly but don’t don’t let Google own you.  Don’t be Google’s bitch.

16 Replies to “Does Google Own You? aka Don’t Be Google’s Bitch”