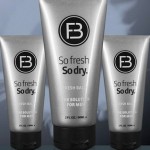 This domain name doesn’t beat around the bush, it’s exactly what you think. Freshballs.com sells well…..cream to keep your friends down below…..fresh. It’s difficult to tell if the site is comedy or real but it certainly gets your attention.

This site is very similar to the viral website ad for Philips’ BodyGroom site called shaveeverywhere. It seems if you want something to go viral it seems one of the best ways to do it is to talk about the area down below and how to improve it.  I don’t know if they are really selling anything on the site but it looks like they are willing to take your money. I just don’t want to spend $15to find out.

This is a strategy I’ve used before.  You can’t tell from this unfunny site but all my blogs from the past used to be comedy. I used to own wallstreetfighter.com (now owned by Break.com and changed to Mademan.com) In the past I have had a couple simple sites like this go viral and it can be fairly lucrative when it finally peaks and it really is quite simple to make.  The hard part is monetizing the site as you really have nothing to sell but you can’t put up ads or else it ruins the joke.  I usually just moved the traffic over to my comedy sites and made money there.

The key seems to be digg or reddit.  Once they hit the front page there, it explodes.  A good viral campaign at its peak can hit 75K to 100K a day and sometimes even more. Freshballs is another reminder there are a million ways to make money on the internet but you can’t reach your peak if your balls aren’t fresh.