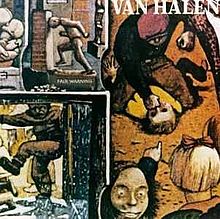 Brett Norton evidently loves Van Halen.  So much that he runs a forum called VHLinks.com centered around the band and its fans.  He also purchased FairWarning.com, the name of Van Halen’s 4th studio album originally release in 1981 as a testament to his fandom. Brett was nice enough to let some board members use the domain as an email address but on August 21st he made this announcement on his forum

Well I got a crazy offer to buy the domain name the other day, and I sold it. I actually think I could have gotten more in hindsight, but was so shocked by the offer to begin with, I took it. So I have to transfer over the account to Network Solutions within the next week or so.

Obviously that means that if you have use that as your main email address, you need to transfer over to something else and soon, because I don’t know how quick they’ll change it, it’s out of my hands at that point.

I will post when I have approved the transfer, so at least you’ll have a little time, but my thinking is it could be early this week. So please make plans to do that.

Any questions let me know. Sorry for the inconvenience.

He didn’t actually release the dollar amount of the sale but no doubt it was a pretty good sum but it seems like the bidder started high from the beginning and as he mentioned he was “shocked” and took the offer.  As he admitted he could have gotten more if he had done a little negotiation but it sounds like he was plenty happy with the total and that’s all that matters.  And why did he think he could have gotten more?  Because look who purchased the name

FairWarning, Inc., a leading supplier of solutions which monitor and protect patient privacy in electronic health records, today announced the acquisition of a collection of domain properties important to the FairWarning(R) brand, including FairWarning.com.

The acquisition of the FairWarning.com domain name gives FairWarning(R) the ability to directly leverage its brand through existing trademarks, marketing efforts, and intellectual properties including FairWarning(R) and Trust but Verify(R) which are both registered in the United States, Canada, and the European Union.

FairWarning(R) privacy breach detection now protects patients in the US, Canada, France and the UK. In total, FairWarning(R) is protecting patient privacy in over 700 hospitals and 2,200 clinics. The additional domain names include those specific to Canada, European Union, Germany, the Netherlands, Spain, Switzerland, and many other countries.

Fair warning seems to be a fast growing company.  According to a recent report at TampaBay.com “FairWarning, with a current work force of 40, has revenues “in the tens of millions of dollars” and is on track for triple-digit growth this year, CEO and founder Kurt Long said. Founded in 2005, the company now provides privacy-breach detection for more than 600 hospitals and 2,200 clinics in the United States, Canada and the United Kingdom”  In a time where the economy seems to be floundering, Fair Warning seems to be flourishing adding up to 70 new employees this year.  It’s these kinds of companies that seem to be smart enough to know when to make the right expenditure for a domain that will help promote and grow their company. Sounds like a great company bought a great domain for a fair amount of money.  I bet Brett never though his love of Van Halen would lead to this kind of cash.