I’m going to admit it, it was a very very small meeting.  Basically it was just me and this guy I work with.  Despite the fact it was just the two of us,  we had a great time.  The party was sponsored by the Homer Lake Women’s Quilting Club and both of us got an incredible hand stitched mousepads that said “Domainers have long tail keywords”.   We both had a laugh and got right down to business.  Some of the highlights of the meeting.

1. Todd used his Godaddy .99 cent coupon code and registered 5StarLamb.com.  After the register we got a bit off topic and talked sheep for a half hour.  Did you know that more than half of sheep have twins?

2. We had a guest speaker.  A 15 year old kid from University High School that gave us a talk on incorporating the Twitter Api into a site to bring in content. Unfortunately he had to quit his talk short because his Mom had to pick up early to go pick up his retainer that at the chemistry lab.

4. We played the game “Guess How Much that Went For”  where I called out a name and Todd guessed how much it sold for.  The first name I called out was Candy.com and he answered $50 and the game ended.  Todd’s a new domainer.

5.  We got out the official beer of the Urbana Domainers Club, Pabst Blue Ribbon and played a quick game of beer chess.  We’re not sponsored by them, it was on sale at Sam’s Club and we picked up a case.  We each put in the $7 we saved from the Godaddy coupon and put it into the club fund.  Next meeting we’ll also be offering Capt’n N Coke.

6. We had our first live auction.  The name for sale was 5StarLamb.com.  Todd bought it for 1.29.  We put the money earned into the Capt’n N Coke fund.

7.  Ended the meeting with an event we call “Super Awesome Idea”.  Basically each member of the group goes in front of the club and presents an idea to either help sell a name or monetize a site and we pretend we have a million dollars and decide whether we want to fund the idea.  My idea was to have a quick 2 second splash page promoting a company on the mobile edition of a few of my websites.  Todd didn’t know what a splash page was so he said he was out.   Todd’s idea was to pay someone to make a widget with a clock on it that would sit in the top right of the web page.  I passed.

Overall it was a tremendous event.  We took in $14.30 for next month’s meeting and when Todd’s wife came to pick him up she said she might be interested in coming next month.  I’m not sure I want her to come. Not because she doesn’t know much about domaining but because she drinks the hell out of Captn’ N Coke. 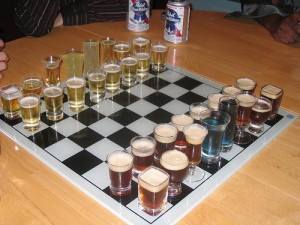 3 Replies to “History in the Making. First Meeting of the the Urbana Domainers Club”