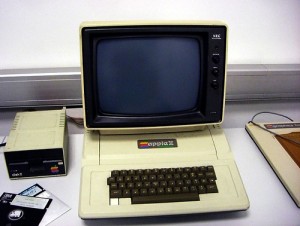 I remember the day my Grandfather showed it to me.  A big Apple  computer with the cool Apple logo.  It was an Apple computer and it had my what would become my favorite games in the world Lemonade Stand and Adventure.  It would also be my gateway to a world far away from Central IL.  Who would of thought I would spend a few hours a night at that computer for the next 30 years.  That started in  1977 (Lemonade Stand came around the late 70’s)  and I’ve been using Apple computers ever since.  I was cool in the 70’s, pretty cool in the 80’s, stupid and frustrated in the 90’s, and now cool again in the 2000’s.

During the 80’s I got my first modem.  I literally placed my phone on the modem and dialed up what was the first Bulletin Board system.  It was the first version of forums and I ran auctions.  I would sell toys and baseball cards by posting a toy for sale, how long the auction would last,  and people would respond with a bid.  Each day I would post with the high bidders.  I then moved to Prodigy. Eventually a company called America Online came along, modems got faster,  and I moved my auctions to AOL chat areas.  Then came the World Wide Web

I can remember my first web page.  Adam Curry’s site, it may have been MTV.com .  I remember later hearing the story of how he registered it, used it to promote MTV and then was sued by MTV because he left to form a website development company.  Regardless, I remember typing in the url and waiting…….and waiting……..and waiting.  Eventually it came up and it was pretty cool but not any better than AOL.  While the web was developing, I was still doing auctions on AOL.  Then I received an AOL email.  My email was [email protected] to show you how old and early I am/was.  It was from a site called Ebay.  They were selling pez dispensers but wanted to open up to auctioning toys.  So in mid 1997 I joined Ebay as one of their first members.  I liked it so much I bought 10% of the company………..I wish.  I had the opportunity to buy in early but bought a total of 100 shares.  Now I did sell it for more than 10K eventually but I left a lot of money on the table early.  But it gets better

I was completely cognisant of web names and their value in the mid 90’s.  I could see what could be done but there was one problem.  Money.  I didn’t have any.  I had just started a business and had to use every penny to get it started.  I did register about ten names, and they all sucked.  I let everyone expire except my daughter’s name.  I’ve been there for every popular trend, knew what was happening in front of my eyes and yet I never seemed to successfully monetize any of them.  Fortunately in the mid 2000’s I saw a trend in web site development

In 2003 I realized you could make a decent website, get some traffic and flip it.  For the next 3 years I did exactly that.  To the tune of a few hundred thousand.  I turned that money into a combination of wasteful spending, cars, and a few very good domains and that brought me here.  A wiser man with a little more disposable income , ready for a new challenge.

One last thing I’ve forgotten to mention.  I did make a little investment back in the day.  It was in that favorite computer company.  A little company called Apple.  It wasn’t much but let’s put it this way, my house should have an Apple logo on the side.