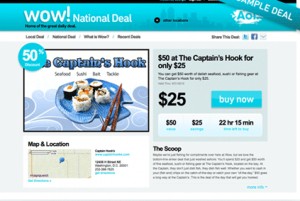 It’s funny how many World of Warcraft players cried foul.  That typing a few more letters was going to be a burden.  Of course, the 10 hours of online game play in no way cuts into their every day lives but typing a few extra letters?  This is a big deal

For AOL it was a great business move.  WOW players will go anywhere as long as they get their fix.  Despite the recent boos, in reality they could care less about the url.  I’m not saying a coupon site is the world’s most unique idea but the name is a pretty good fit. WOW.com appears that it will be a copy of Groupon, a site that offers deals/coupons both locally and nationally.

In reality it’s probably going to make a lot more money than the forum but try telling that to Luthar the Almighty, leader of the Shinga Clan aka Chris Morton, 15, from Skokie IL

3 Replies to “I’m Headed to Get Some Quick Tips at Wow.com Before I Play 18 Hours Straight of World of Warcraft and WTF? Coupons?”