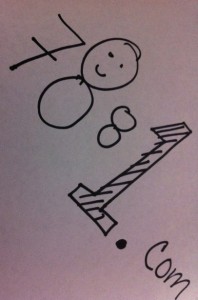 If you read my blog you know I think four number dot coms are a good investment.  To put my money where my mouth is, in October I decided to put $10,000 (roughly) into NNNN.coms.

I was looking for names that were easy to type out on a keyboard and that was about it.  I soon learned that 4 at the beginning or the end was a huge price reducer.  It was pretty easy to figure out when all the name available for sale were following that trend.  I originally thought the non 4 domains looked expensive and compared to them, the others are more expensive. Fortunately for me,  I bought the names with “4” for $500 or under and one even ended up having 150 uniques a day and makes a little money.  I also made one more great discovery. 4.cn

4.cn not only provide a liquid platform for numeric domains but it gave past sales numbers.  It was with these numbers that I was able to put together a sales list and come up with patterns that seemed to sell for more.  It’s more a hypothesis than a theory but my algorithm is building every day.  For Chinese and Asian speaking consumers, these names are more than just numbers.  Combinations that spell certain words or combine to form meaning. Not being a native speaker I was fortunate to have met Bonnie at 4.cn who is my broker and helps me with my questions.  I will often ask her what or if a four letter combo means anything.  She was the first to temper my enthusiasm after purchasing a name with lots of 8s in it.  She said something to the effect of “Nice name, but better if it ended with 8” I learn a little more each week and names that end in 8 are pretty much my ideal numeric.  But as we all know, in order to make money in this business you have to sell, and I decided to liquidate a few of the names.

I decided to sell a few names because of one reason.  The Namejet prices on nnnn.coms are starting to soar.  People have taken notice and started listing their numerics more than ever.  Last year you would get 2 or 3 four number dot coms a week and now you can get that a day, several days a week.  The prices have also been strong.  The names with 4 still struggle but the others are usually over $1000.  So I decided to test the market.  I sold three names.  Two with fours (the weaker names) and one of the good names I bought for under $800.  The results were as expected on the first two.  Reaching around $600.  After commission, I really didn’t make much but I cashed out and will put them into a better name.  The stronger name reached almost $3K.  Putting the three names together I turned a little under $1800 into $4200 (before commission) in less than 6 months.  I can live with that.  For some, that’s crumbs. For me, it’s an important part of my simple strategy.  Buy a name, sell it for more, pay my taxes, and then use the balance to buy a more expensive better name.

So far my NNNN.com experiment is going well.  The market is nowhere near peak but the deals are much harder to find. I have plans to sell two more of the names in the near future, leaving me with only the strongest of my names. If the names sell for what I expect, I will have gotten back 70% of my initial totals and I’ll still have 5 names of which I think I could flip for  $10,000 at today’s rates.   Doing the math that tells me I will 70% return overall if I were to completely liquidate tomorrow which is a great return for the first 6 months. I haven’t done myself any favors by constantly talking about it and putting up sales data but I have always shared information and somehow I’ve always profited and come out just fine.   The key is to buck up and buy the more desirable names.  I just hoping I have a better idea of desirable than others.