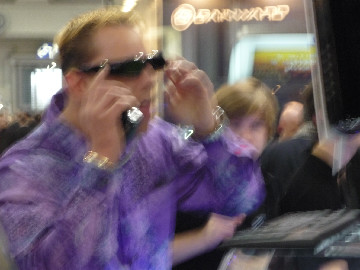 “3D is a waste of a perfectly good dimension and Hollywood’s current crazy stampede toward it is suicidal,” says  Roger Ebert.  Despite the fact that 3D is in it’s third rendition of the “It” thing,  studios, hardware producers, and domainers are still getting caught in the 3D trap.

I remember when I was younger I went to see the movie King Solomon’s Mines in 3D.  A terrible movie that only had to be seen because it was in 3D.  Was it cool? It was.  It was fun to have a stick point out of the screen, I admit it.  My Dad had the same feeling when he saw it as a kid for the first time.  He said it was OK but he liked a good movie more than a movie driven by special effects.  I told him “this is different, the technology has come a long way”  Fast forward 25 years

Here we are again.  3D is all the rage.  Every movie HAS to be delivered in 3D.  Unfortunately 95% of the movies are re-created in 3D only to get the higher ticket price.  It’s a financial move, not a technical move.   Avatar was obviously the film that drove the craze. The difference is Avatar was created IN 3D FOR 3D and truly was a new technology.  To replicate this takes hundreds of millions to do right. Studios have chosen to go the cheaper route and convert their movies.  The process is expensive but quick.    The resulting converted movies are of lesser quality and by the time the “shot in 3D” technology becomes cheaper, viewers may have gone away.   Here are a few more reasons why 3D won’t become mainstream.

The Glasses.  Nobody likes to wear special glasses. We’ll do it for a special occasion but we’re less likely to wear them every time we watch television. AND you can’t watch 3D without them.  Nothing like a technology that needs a 99 cent add on to make work.

We want depth and clarity but it doesn’t have to be 3D.  In my opinion 4K video is much more likely to be a part of everyone’s home than 3D.  You hardly hear about it because there isn’t much hardware for it but if you’ve been to a trade show and seen it, it’s very nice and certainly an improvement.

The people that actually want 3D televisions is low.   The market is much lower than the Internet lets on.  I have no data to back this statement up but a 3D television in not anywhere near the top of my tech wants and that is the same for most of my tech loving friends.  The rest of the world is just now transitioning the rest of the their big Tv’s over to flat screens. They’re not about to switch over to 3D very soon.

It makes people sick. The movies are made for you to concentrate on one area of the screen and if your eyes leave that point to study any other part of the screen, it makes you nauseous.  I love looking at the background and beauty of a well shot movie.  On one hand they can create an even more beautiful picture using 3D but you can’t enjoy it long.

3D movie revenue is falling like a rock.  From an article in The Telegraph

When Avatar came out, 71 per cent of Americans who went to see it on opening weekend – often the peak moment for a new release – opted for a cinema showing the 3D version. In March, when the animated fantasy How to Train Your Dragon was released, 68 per cent of the audience chose to see the film that way.

But by May that figure for Shrek Ever After was down to 61 per cent. At the beginning of this month only 56 per cent saw The Last Airbender in 3D, and a week later the proportion fell even lower, to 45 per cent, for the newly-released animation Despicable Me.

The figures have provoked an anxious debate within the film industry, which had previously hatched plans to convert popular films on its backlist – everything from the Star Wars trilogy, to Harry Potter, to the college pranks of Jackass – into the cinematic style du jour. Studios are already working on at least 24 brand new films in the expensive format for release next year. Now some fear that the “3D bubble” has already burst.

While I’m not saying that 3D is going away, what I am saying is that it is not going to be the next big thing.  It is the big thing this year and will continue to be a special event, but not an everyday occurrence.  If you hand registered your 3D domains then you really have nothing to lose,  but those paying big money for those domains are not going to fare as well.  In my opinion, now may be the time to sell 3D domains because 3D is about to peak in the next 12 months.  Audiences have been there, done that and their spending is starting to show they’ve had enough.