This is one of my favorite quotes from Fulton J. Sheen.  Although I’ve been buying domains for quite a while, I didn’t consider myself a domainer until the last few years.  In that time, I’ve met some fantastic people.  Gentleman and ladies that are amazing business people, marketers, and skilled web professionals.  I’ve read blogs that are incredibly “in the know”, others that create great dialogue among domainers, and some that provide great insight of their personal styles and strategies.  Mixed in all this are some people that don’t have a creative thought in their head, think they are better than the rest, or are just plain jealous.  Today there were a few blogs that had plenty to say but refused to post comments that were less than flattering, so I decided to post them here.

Jealousy is an understandable trait.  Most people want what others have.  Most are not willing to do the work necessary to achieve greatness.  It’s far easier to tear others down to their level than it is to build themselves up to see eye to eye.  Don’t think Rick Schwartz could make it in today’s market?  With all due respect to the Fusible Family, a blog that is well written with lots of effort, to think that Rick would not be successful in anything he does is naive.  I do not know Rick personally, we met in Vegas (I highly doubt he remembers the meeting)  but I know enough about his pre-domaining life and post register life to know that he will succeed at almost everything he does.  Like him or not, he is a hell of a marketer, believes 100% in what he is doing, has enough money to be patient and do things right.  As for his BP names, if he incurs legal problems with his registers, then what do we care?  Is this reason to dislike a person that has generated more pub for our industry than any other person?   Nope,  pure jealousy

And then there’s Mike Cohen, I realize the guy is successful but if someone is going to write a book on HOW NOT to run a public relations department he is a Pulitzer Prize winner.  He wrote this little ditty today

No, I am not here to make life-long friendships and develop lasting relationships that can blossom into something totally awesome like in the movies. Not interested in having lunch or dinner with you for chit chat. Don’t want to chat on msg’s or phone either about your problems. Sorry, no time. I don’t try too hard to make anything happen. Sure, if it happens overtime, then so be it, that means it was right but as you already know… I don’t kiss ass. I don’t hold anything back either… Never that.

Frankly, I don’t give a shit about you if we cannot align our businesses / interests one way or another and make some money together… I just don’t care about you really. There is a lot of “politics” in this domaining biz, which I take no part of. I am still very bullish on many companies in this biz as well as the future of domains. I try to keep it real, and most of the people we do business with daily through the various businesses we run appreciate that the most.

“Keep it real”…….The most worthless statement in the history of English.  Used by people that want to go against common courtesy and manners.  Heaven forbid someone show some class or do something they don’t completely agree with in order to make the other person feel a bit better. I responded to his recent post and albeit his right to publish or not publish comments, I felt my comment was pretty open and ordinary yet he did not post it (took it down) . 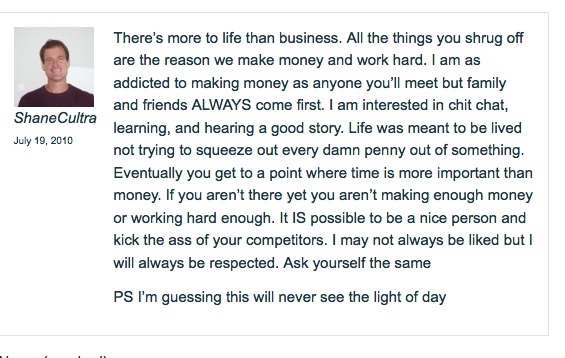 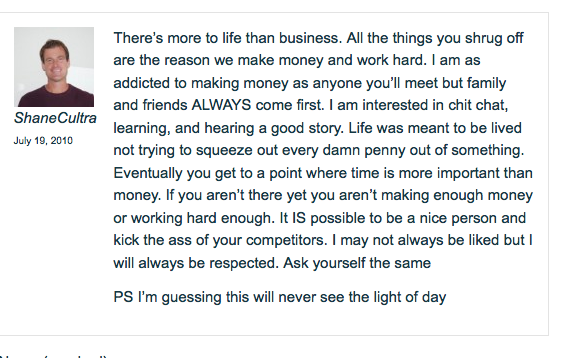 And I was right.  Although it appears that my  purpose is yet again to bash Mike Cohen but it’s not directly aimed at the man.  The purpose is to let other domainers know that there are a million ways to make money in this business and to be jealous or discount the way others do it makes no sense.  I always hated people that play the martyr .  The “me against the world” strategy  is usually left for people that have pissed so many people off that it really is that person against the world.  Every thing he says he has no time for,  is the reason I love domaining.  I enjoy the conversation.  One of the best times I have had is sitting down to eat with Morgan and Patrick.  I write this in hopes that there aren’t many more people in domaining that don’t have time for the bullshit because I’m all about the bullshit…………..and making some money while I’m doing it.

11 Replies to “Jealousy is the Tribute Mediocrity Pays to Genius”