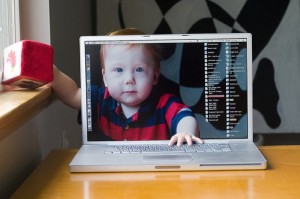 Domainers and website owners have known it for years, young kids have no idea what is a paid ad and what is just a link.  Studies over the last 10 years have pointed to data showing they will click at much higher rates than other age groups.  According to the latest data from video ad network YuMe ” Kids under 14 are generating the highest click-through rate on pre-roll ads, at 3.7%“.   The next highest click through?  Over 35 at only 1.9% which means that kids are twice as likely to click on video ads.

Way back in 2000, Nielson came out with their own study  and found that kids age 2-11 were twice as likely to click banner ads as any other age group.  Of course they LOVED any ad involving Cartoon Network or cartoon oriented advertising.  Since that time, the average online time of kids aged 2-11 years has risen 63% and still rising.   The results have been lowering PPC rates and even more ads drawing the eye of the youngest age group.  Lots of bubbles, cartoons, and games, all trying to get them to spend time on another site.  All in hopes of getting them to ask Mom or Dad to spend a few bucks to give them some extra priveledges on some game or online world for younger kids.

Some may think this could be considered some sort of click fraud but I’ve found it’s the advertisers themselves who are putting up the ads that are heavily geared towards the young.  They know what they are paying for and actually want the clicks.  So this leads me to the most obvious conclusion in the world.  Kid sites are very profitable and I want a piece.

Despite the low PPC,  they generate an amazing amounts of clicks.  I recently put up a few test sites (both landing page and mini 5 pagers) to test out what I had read about positioning of ads and videos. I had been looking for a great kid domain name and stumbled on Rated G dot com over Christmas.  I first thought about forgoing the kid route but decided to throw it up on WhyPark and see how it would do on Google.  Low and behold, it instantly ranked 1st page number 5 for a few weeks and then last week Google dropped it off.  I think Google is catching on to WhyPark but that’s a different story.  It did show me that with a little development this could be a heck of good kids site and will rank VERY well.   I have hired a person that specializes in kids programming, my 10 year old daughter.  I told her I want her to simply point out her favorite sites, her favorite toys, tv shows, and  movies and we’re going to put them up.   Simple as that.    I even think I am going to make a couple funny kids videos as well.  I figure I will only have this mini test market (my daughter before she becomes a teen) for a few more years so I might as well take advantage of it.  My daughter stands to make some good money off this but like a good Dad I will not give it to her and pay her in Pop Rocks and cute shoes,  the only wants of a 10 year old girl.

3 Replies to “Looking for Users That Click Ads Twice As Often? Find a 2-11 Year Old”