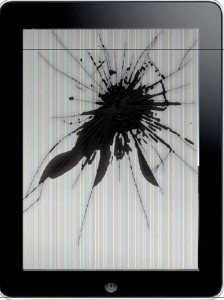 I got my new iPad in this Saturday.  So did 700,000 other people.  I’m an early adopter of all Apple products and not ashamed to say so.  I realize some people are even more obsessed than I am so I am catering to the Apple fans that want to be truly the first to own a special Apple product.  I have put an auction on on Ebay selling the VERY FIRST EVER broken iPad.  I’m not going to break it in advance but it will be broken when they receive it…..guaranteed.  It is official, I am the first person to offer this and the winner will be a part of Apple history.

For those of your that are regular readers, you know that this is just for fun (unless someone really wants to do it).  Making people laugh and having a good time while making some money is how I operate.  Creativity trumps all in today’s world of marketing and I thought this was a creative way to draw attention.  The link I put on ebay to this site wasn’t to get a free link.  Links on ebay carry no juice and I know this.  I merely put it on if people wanted to know more about the person behind the auction…..and boy did they want to know.  I received 15 emails today telling me how funny they though it was.  And 2 telling me I was an idiot.  I also got some funny questions that I responded to for all to see on the auction page  to add some additional humor. For those that think I don’t have a chance in the world of selling this at $1200 think again.  I’ve did something similar on ebay several years ago and it went for a crazy price.  Somebody with a lot of money got the joke and played along.  This time, I’m not looking for money, just a few laughs.