It’s that time of year where our company sits down and comes up with an advertising plan for the upcoming year.  We use a combination of direct mailing, email newsletter, TV ads, Newspaper ads, Adwords, and had recently decided to try and use the online version/website of the local paper.

I know it, they won’t admit it, but the paper readership is dwindling.  It’s not that their hunger for local news has faded but rather the location that they want to received it. More and more people are wanting their news online. With that in mind we set up a meeting with the local paper to discuss an online campaign.  The campaigns I’m running are really only campaigns to gather email addresses of people that willingly sign up for our newsletter and like our store and products, in general gardeners.  That will let me contact them directly at later dates rather than having to pay someone else.

So we get the rates.  Unbelievably they want $22 per thousand impressions on a 728 X 120 header banner or $16 for a 300 X 250.   Now our local community has a population of about 100,000 and the local website for the newspaper gets a very respectable 2.5 million pageviews per month.  When I started doing the math I figured out that it would cost me $55,000 A MONTH to have the header banner and $40,000 for the 300X250.  I congratulated the salesperson right then and there and let him know that he officially had eclipsed the advertising rates of almost every website on the net. Even TechCrunch hasn’t eclipsed those numbers. 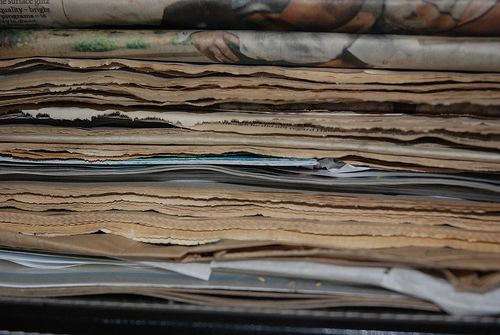 After a few laughs (all came from me) he said he would get back to me with better rates as he realized they might be a little high.  I reminded him that there was a reason that every ad on the site was from a sister company of the paper ie the local radio station, contests they were running, and local magazines.  Two hours later he gets back to me and lets me now they can cut it in half.  So ONLY $27,000 for the month.  I told them I could start a new online local paper for that price.  To translate this I can get two commercials on the top rated morning news PLUS one primetime ad every day PLUS an Ad on the ten o’clock news every single day and have 5-8K left over.  So here’s what I did instead, I found the other local hub,  it’s the local TV station that set up a nice news website and bought access to their email list of 10,000 local people.  I will be sending them each an invitation to sign up for our newsletter in exchange for free plants and this costs less than what it would cost for 1 day advertising at the paper

I asked our local paper if they had something similar.  They don’t even have an email list, they twitter.

6 Replies to “My Local Paper Proves Once Again, Old Media Doesn’t Get It”