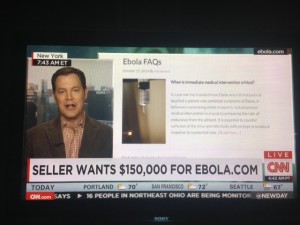 Jon Schultz has been all over the news for putting a price tag on Ebola.com.  Every talk show, news program, online site, and domain blogger has given their opinion on the name. What nobody else has said?  It’s ridiculously cheap at $150,000.

The media as usual, has put on their blinders and chosen stories that garner reaction rather than dig deeper into facts and information.   This domain price pales in comparison to drug companies that charge $120,000 a year for cancer drugs that are 5% better than the previous drugs. Preying on people that want to live.  Cancer sufferers pay anything to live another 5 weeks and the drug companies paid off the US government to pass a law that says Medicare HAS to pay whatever the prices are that are set but the drug companies.  THAT is tragedy, that is what should be all over the news.   60 minutes did a piece last week that takes a look into the unethical practices of drug companies and how they have moved beyond trying to be a profitable company to the fleecing of dying people.  Comparing this to a guy selling Ebola.com is almost comical.  The act of owning and selling a domain is not cybersquatting.  Nobody owns a virus, nobody deserves to own the domain to do “good” with it.  There is no Mr. Ebola that rightly owns the name.   Johnson and Johnson own Cancer.com and Obesity.com, many more people die of these two but not one story has been written about them.

While others are watching the stories and thinking of Schultz and his company as squatters and bad people, all I’m thinking of is “don’t be a fool and sell it for $150K”.  There has already been more than $150,000 worth of free marketing for the name.  Hundreds of links, tens of thousands of new visits.  The name instantly doubled in value.  Not to mention this is just the beginning of the disease.  It’s not going away any time soon.  In the meantime there are going to be millions looking for more information.  Even if the United States sets up Ebola.gov we all know that they do a lousy job of updating content and information.  The website will certainly pale in comparison to what could be done with Ebola.  Topping it all off is the billions of dollars that will be charged and made for the eventual treatments.  The companies that provide these services would be wise to spend the first million of profit on ebola.com.  If their treatment isn’t already a household name it would become one on Ebola.com. 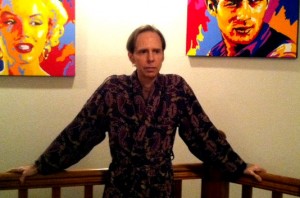 So congrats to Jon for owning such an important name in today’s society.  It would be wise of him to give some of the proceeds to an Ebola related charity. It would also be wise to drop the whole douchebag act of wearing a robe for his pictures.  I’m not saying wearing a coat and tie, just saying you don’t have to look like Mr. Burns for all your photos.  He also could perhaps just not say out loud everything that he is thinking.  Lines like  “Our domain, birdflu.com, is worth way more than Ebola.com. We’re definitely holding onto that one for the event,” he said, referring to an outbreak he contends could be way bigger than Ebola, turning the owner of birdflu.com into a very rich man. “That one’s airborne and Ebola would never go airborne in the United States like bird flu can.”  Wrong or right statements like this make him appear to be wishing for death and catastrophe.  Statements like this are why they are calling him the “Merchant of Death”.  And if he sells it for $150K I will call him “the man who gave away money”