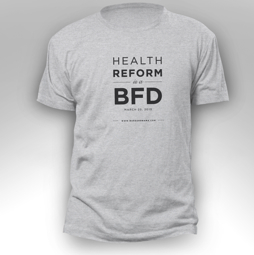 There are a million ways to make money on the Internet but the old tried and true method has always been selling T-Shirts.  Barack Obama is going back to old faithful this week with the introduction of the “Health Care is a Big F’n Deal” shirts for sale on his site. While I expected someone to print these shirts , I had no idea the President would try and monetize Biden’s famous quote and am a bit surprised he would allow a obvious representation of foul language to sold at his home site. Even though I am a Republican (I’m not proud of it at this particular point in time), I thought Biden’s comment that led to the shirt was great.  I think cursing has its place in language and he used it perfectly. Cursing is used for attention and exclamation.  A place where no other word quite does the trick.  “This is a big deal”  just doesn’t describe it as well as “this is a big fuckin’ deal”.   Which one sounds more important?