Last year our Domain Shane Accidental Domainer NamesCon Lunch was such a hit we decided to do it again this year.  There’s already a good group committed and hope that the date works for all.  I tried to pick a time when there was a little gap and after something you all would come for and Frank Schilling is obviously worth coming to hear.  Frank tends to run a little long on his talks but we’ll try and meet right after his talk near the conference sign up desk and walk over.  Bring yourself and a smile.  We’ll get lunch.

As announced in October

“We’re going to have it at my favorite sandwich shop in Vegas (favorite because its good and close) Greenberg’s Deli.  They can hold 20 people in the back so I will cap it at 20.  Last year was a great time.  I can’t remember the entire crowd (I do remember it was a handsome bunch) but two that stood out were Kevin Fink of Flippa and Konstantinos Zournas of OnlineDomain.com.    I remember the two because Kevin spent a lot of time answering questions about Flippa and he was very open and honest about the things he thought they were doing well and 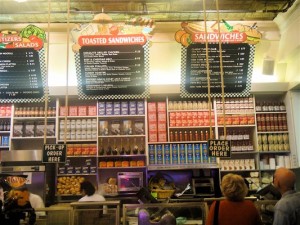 the things they needed to improve.  It was a perfect example of what you get to hear when you sit down for a sandwich and talk face to face. I remember Konstantinos because it was the first time we had talked in person.  At first he was quiet and just listened, but as lunch went by he opened up.  Konstantinos and I ended up having several meals together last year at NamesCon.

I’m hoping for more great conversation this year so I invite you to join us.  Just let us kn
ow in the comments if you’d like to attend and we’ll reserve a spot for you.  It’s a great place to talk to other domain investors in a relaxed environment and even better, the meal is free.  We even pay for chips and a drink if you want.  We’re big spenders.  Heck, we’ll even allow girls.  The only stipulation is that you have to attend Namecon.  Can’t have anyone flying in just for our lunch.  If you have a day you’d rather do it put that in the comments as well.”

We will be having the lunch at 12:30 on Monday the 11th which is again, after the Frank Schilling keynote/talk.  So far we have the following people RSVP.  We have room for 4 more people so RSVP in the comments if you’d like to come along.

Of course Aaron and I