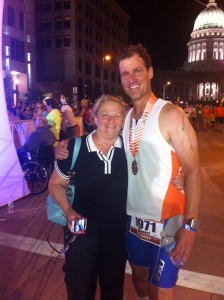 Nothing really.  If you’ve noticed I’ve been away the last three days I was in Madison Wisconsin doing this years’ Ironman.  I knew I most likely didn’t train properly for the big event despite my hour and a half of daily training.  Fortunately,  I’m in pretty decent overall shape.  We’ll start by saying I was 1.5 hours over what I expected to do.  I finished in approx 15.5 hours (5 hours less than co writer Tucker’s Ironman in Florida and yes only Ironmen and future Ironmen writers here).   My 2.4 miles swim went OK but the bike, oh the bike, took a lot out of me.

To be successful at anything you do requires proper training and preparation.  Getting familiar with something even though you’ve never done it.  You have to at least fake your mind into a “been there, done that” mentality.  Your mind and body are very protective.  They will shut you down at the first sign of stress.  They don’t want you to hurt yourself.  It’s the reason you pass out when you’re short of air and why lactic acid builds up.  It wants you to quit.  You have to train both mentally and physically to get past that.  But…

I didn’t expect 88 degrees and some pretty big hills in Madison.  I had heard the hills could get pretty nasty up in Wisconsin. I’m not sure if you’ve been to Central Illinois but we don’t really have hills.  We have overpasses and that’s about it.  Our sledding hills are piles of dirt left over from building the football stadium.  Madison’s were real.  Real hard. 112 miles of hills that had me going up in Granny gear and flying down at 38 mph were tougher than I imagined.  But that’s not what killed me.  It was more the sun.   The sun beat down on me like I was standing in the middle of a satellite dish.  This caused me to drink a ton of water but I had trouble digesting solids. The solids necessary for the run

Once I was to the run I was done.  I felt sick and tired and wanted to just lay down. I couldn’t really eat anything and I was facing 5 hours or walking.  But I came there to finish so I walked.  I walked as fast as I could but I walked.  And I finished.  Those may say it’s an idiotic sport overall but what’s life without pushing yourself into uncomfortable positions?  Those uncomfortable positions make you stronger both mentally and physically.  While I may not have been in good enough shape to do well, I am in good enough shape to work out in the morning, work hard all day at the nursery, and then come home and spend time with the family and work on my domain company and not be exhausted each day.

One of my favorite part of being at the Ironman was being surrounded by winners. Every single participant had a drive that a normal person doesn’t have.  While I don’t know any of them,  I can almost guarantee they are more successful at their careers and life merely from the standpoint of what it took to train and compete in this race.  Almost every single one was outgoing, confident, and mentally healthy.  I received smiles, high fives, and even hugs from guys at the end I had never met.   I’m sure they were all like me and received a combination of congrats and “that’s more than I exercised all of last year” and Chris’ “I moved a couch and was completely exhausted, thought of you”  the next day.

While I’m not saying go do an Ironman.  I am saying push yourself to an uncomfortable place every once in a while. Try new things in business or in life.  Perhaps take just a little more risk than you normally would.  Invest in something that you know is a good investment but it’s a bit more than you’ve normally spent.  Make yourself exhausted.  Give yourself an experience that when it’s all said in done your mind will know. “Been there, done that”, everything is going to be OK and let’s keep going.

And the best moment of all wasn’t finishing,  it was having my Mom there for every step.  She told me she may come up but I wasn’t sure.  I’m not sure how she did it but she greeted me at every single change point.  I get out of the swim to go to the bike, there was Mom yelling “Go Shane”.  I get off the bike after 7 hours and not a soul in sight, there’s my Mom.  “You feeling OK?” she says to me.   And of course she’s waiting with open arms at the finish.   Ten o’clock at night.  She’s got to drive 3 hours and get to work the next morning but she waited up for me despite my taking 3 hours longer than expected. And she didn’t even care one bit. What little disappointment I had coming across the finish was quickly erased when I saw the pride she had for me.   If that’s not worth punishing yourself for, nothing is.