It came from an email out of the blue.  I did a post on what multiples to use when valuating a site and I received an email from Justin from a site called FlipFilter.com. Justin said  he could give me me better data regarding multiples for all the recent website sales at the popular site flipping sites like Flippa and Sitepoint.  I have to admit I get emails like this every day and usually it’s some cut and paste site but I was pleasantly surprised.  FlipFilter is probably the best site I’ve found for watching and compiling data about website sales.  I’ve been trying to come up with general idea of what multiples sites are going for and now I am pretty much able to get that data.

With the site you can

1. See all the sites up for sale currently.  It has an aggregator for many of the website sale sites like Flippa and Digital Point.  You can then search them for lots of different variables.  It also has a section for just domains and one for sites that are being privately brokered.

2. Past sales data.  The site will give you a snapshot of all the sites and what they sold for in the last week.  It certainly helps you get an idea of the multiples.  It also gives you seller statistics.  Letting you know who’s just punching out sites and those that seem to put that seem to sell only higher end sites.  You can develop a trust with sellers using this type of history. 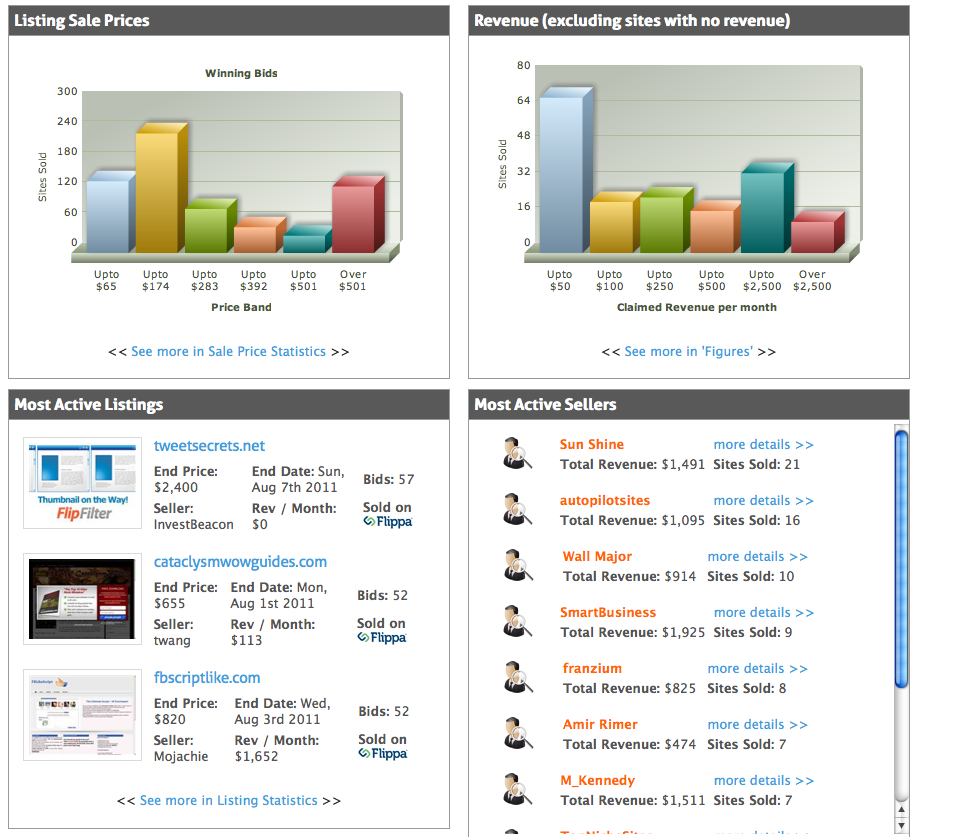 3.  There are research tools including a website valuation tool.  I know there are people like Morgan Linton that are trying to make a whole site out of a website valuation tool but Flip Filter has one built in to the site.  I would imagine that he has gathered enough data over the years that it’s probably as good or better than anyone out there.  You can look back at past sales as well to gather a little more info.  He’s also using Estibot’s API to add their data into the mix as well.   I could go on for a while but it’s just something you’ll have to go in and play around with yourself to see all that it does.

There are a few bugs, one being email alerts.  I see that there are there but I can’t see what I’m going to be alerted to and how I would use them but like all good sites, there are a few glitches here and there.  Overall though, I am pretty impressed with the data you can get.

And of course, it is free if you only want very limited data.  One weeks history and other limitations.  The yearly fee is $129 or $14 a month which I think is a pretty fair price.  I will also say I am not being paid to write this.  I am sharing it because I think it’s a pretty nice site and certainly has helpful data.  Data that can save or make me thousands IMO.  I will say that I have been given a free account because I wanted to see all the bells and whistles.  I wrote Justin to see if he minded if I did an article on the site and naturally he said yes and recommended I at least sign up for the affiliate program. I did but I have no idea what or if I get paid anything if someone signs up.  Honestly that wasn’t the point.  The point was to point out something that can help readers make money so if you do like it and agree with me on it’s value I’d appreciate it you’d let me know. If you sign up and I make some money then great, as long as you get something out of it as well.  Maybe I’ll put the money towards a spell checker and grammar lessons.

3 Replies to “FlipFilter: The Best Tool I’ve Found Yet for Analyzing, Finding, and Buying Websites”