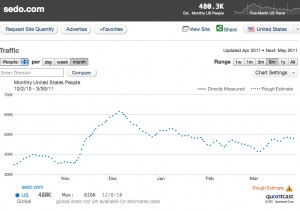 Every night I scan all the auction and drop houses for names.  Over the last year, all the auction houses have good days and bad days but one thing has been pretty constant.  Sedo hardly has any quality names up for auction on a regular basis.

This is certainly not the case when they put together an auction.  When that happens the auction platform is usually packed with solid names, but the other days?  It’s like being the last person left at the bar, leftovers and silence. This doesn’t necessarily mean that Sedo is not selling names.  On the contrary.  They seem to be selling plenty of names in the brokering division and the bid and negotiate section.  Users just aren’t sending any names to auction.  There are only a few possible reasons for this and these are just my opinions, no facts to back up my thoughts.

2. Buyers want the names more.  They don’t want to risk losing the name or having to pay more in auction so they are negotiating more until they strike a deal

3. People are using other platforms.  Godaddy and Afternic sales are growing all the time and I would imagine it’s taking away from Sedo

I’m not really sure of the reasons but regardless, in my opinion, Sedo is no longer a daily source of good names at auction.  Of course they could change this if they wanted.  They could take outside names on the auction list for a fee.  Make people pay an upfront free to list their names.  It’s become somewhat of a vicious circle because nobody is going to the daily auctions except for the big ones and nobody wants to “friend list” a name because there aren’t as many people coming buy to take a look at the Sedo auctions as in the past.  By friend list I mean having a friend or someone you know fake bid to start an auction.  Yeah, act like you don’t know what that is but this is done daily.  If they started taking names this would all change. Domain sellers are looking for a large marketplace to pay to list names.  Namejet is closed to new sellers, Bido doesn’t have the buyers, and Godaddy has too many names and you get lost in the madness. Snapnames seems to work pretty well but it’s often the same as Godaddy.  You need to have multiple bids to really get noticed.

So maybe it’s just me. Maybe I’ve started getting used to all the good names coming through Namejet, Snap, and Godaddy and it’s never changed.  Maybe it’s like DnForum.  I used to live on the site but eventually I outgrew what was being offered there.  Or maybe I’m saying what others are thinking.