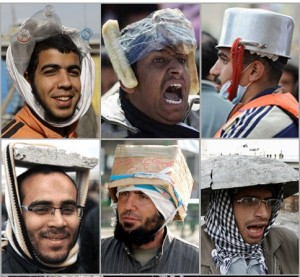 With Mubarak stepping down, Egypt is about to enter a huge transition.  A transition led by the youth of Egypt.  Among the millions of young Egyptians in the crowd I kept seeing one theme.  Every day in pictures I would see somebody wearing a crazier hat than the next.  I don’t know if this was a way to break up the monotony of marching and protesting all day but it sure got a smile out of me every day.

It started with my daughter pointing out a funny hat someone had put on and then became a Where’s Waldo? of funny headpieces in the pictures of the protests.  While I don’t belittle the importance of the events, it was nice to see that among all the seriousness were some people having a good time. Among my favorite is the now Internet Meme “The BreadHat”.  The hat that set back hat wearing 50 years.  A hat AND a meal. Also in my favorite looks.  The watter bottle hat, the pot hat, and the the Karate Kid hat aka the Cinder Block hat.