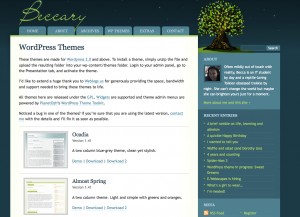 Becca Wei of Hong Kong was a hit in the world of WordPress Themes. With Themes like Ocadia and Almost Spring, she made simple and clean themes that people seemed to like. Her site Beccary received thousands of uniques per month and had over 8000 links.  Then in June 2007 she she decided to quit.  She just stopped posting and moved on to another world.  People saw her active at Facebook and on the net but she made no mention of why or goodbye. Rumors of a new job and new life floated around, but nobody really knew for sure.  She had many fans that posted questions asking what happened on various forums and blogs across the internet.  Evidently she had other things to do,  so she let her domain name expire as well.

Those 8000 links and wordpress theme traffic are now attracting big interest over at the Godaddy Expiration Auction. There is still 4 days left and the price has already risen to over $10,000. For someone that wants highly targeted traffic in the WordPress Theme arena, this is a fantastic name. Another big price increaser is the PR 7.  It’s hard to find true PR 7 sites at drop auctions so that alone adds thousands to the price.  PR 7 links have a value of $30 to $100 a month depending on domain, so it would be fairly easy to get your $10K back , but this isn’t the final selling price. Whatever it is, I’m sure Becca Wei wishes it was going in her pocket instead of Godaddy’s.