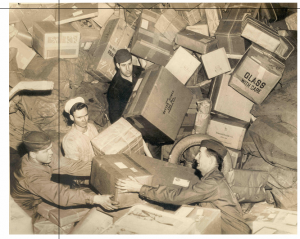 If you’re like me you get a ton of emails. Let me rephrase that, a shitload of emails.  I do a little clean up as I go but with 3 computers at different locations and an iPhone, you read it on one device and it festers on the others.  My home computer is the main computer that keeps all emails from all accounts. Permanently.  I also have a backup that backs the computer up every 5 minutes. What this leads to is a computer with every single email I didn’t delete as I read it from the past 3 years.  14,435 to be exact.  My job today was simple.  Go through all of them and delete every email I didn’t need to save while creating a contact list from those emails that had every nursery related, domain related, and friends and family related person accounted for.  It only took me 3-6 hours (did a few other things while I took some breathers).  Here are 10 things I found while doing it.

1.  I’ve met an incredible amount of people over the last 3 years.  I had over 200 contacts to set up.  The domaining and online world is one of the friendliest environments out there and it’s amazing how many people have reached out to me.

2. The net worth of my email list is in the billions of dollars.  It’s helped by the fact that I used to be a small investor in a company that was also owned by Fred Wilson, Marc Pincus, Howard Lindzon, and Roger Ehrenberg among many more.  We talked through email weekly to go over strategy and brainstorm. I didn’t think in a million years we would sell the company, I just wanted to hang with that group.  It was an amazing time and having my name being typed out or said by guys of this caliber was an honor.  I was known as the “creative” one of the group.  The creative is still there but those guys have long forgotten about me.

3. A few of the people in my emails are now dead.  I had a good running friend die of brain cancer and a family member drown while sailing around the word (got caught in a typhoon off of Africa).  Reading some of those emails was hard.

4. I’ve bought and sold a lot more domains than I remembered.  I had forgotten some of the names.  A few of them I even forgot I owned and didn’t renew.  Luckily all of those were cheap but still wasted money. I might be a bigger domainer than I thought.

5.  I get a ton of price requests/ spam  from Asia.  Not positive they are from Asia but they are worded in way (and their IP addys) that this would be my guess.   Not one has ever really bought a name or helped me in any way.

6. I forgot to answer a lot more emails than I thought.  Among the 14,000 were some emails I never remember seeing.  I sent a few apologies that were 2 years late.  I figured better late than never.

7. I used the opportunity to say hello to some friends I hadn’t written in a while.  To say thank you to people that I forgot to thank.  And double checked how some domains worked out for people selling, buying, or just asking advice.

8.  I counted 6 companies that promised to send me shirts and never did.  I don’t know what’s worse. Me still getting giddy over a stupid little shirt despite the fact I have hundreds or the fact that most of the companies never sent them.

9.  Domainers have more email addresses than the average person.  I was amazed how many people emailed me from 2, 3, and even 4 email addresses.  Most of my other email friends have a work and a home.

10.  Out of all 14,000 email addresses there one NOT ONE,  hotmail or yahoo address.  Of course there could have been one hiding in there but I’m pretty sure I didn’t see one.  I must run in a pretty tech savvy crowd.

One Reply to “10 Interesting Things I Found While Cleaning Up 14,000 Emails”