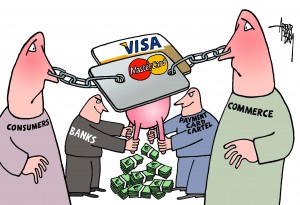 Credit Cards are a part of life I understand.  They are also a cost of doing business.  But the banks were screwing me and now it’s time you paid for your own free stuff. I appreciate the fraud prevention and 24 hour deposit into my bank account the the banks and clearing houses provide and certainly could not do business without them but I’ve been getting screwed for years.  Consumers have been enticed with airline miles, cash back, and all kinds of free stuff, and I the business owner, not Visa, Mastercard, or the banks have been paying for it. Its your turn

What most people that don’t own a business or take credit don’t realize is that my fees can be based on what type of card is used to pay for a transaction. If you have a high mileage giveaway card then I have to pay a higher rate.  As much as 1% higher.  While I appreciate the customer that spend $12,000 with me, the 3.5% Visa transaction cost on that particular card is expensive.  If that person would have paid with a normal card it would have only been 2%.  I am essentially giving him the miles but he think the card issuer or Visa is.  Visa argues they are taking all the risk.  I don’t mind paying for the risk.  I just don’t want to pay for somebody’s trip to Florida.

It gets worse with Debit cards.  Why?  Because I felt the risk for the bank and V/MC  is even less.  They can see immediately if the account has a balance.  Sure the chance of fraud is there but there already is a separate fraud charge insurance fee.  But the fees are starting to turn in my favor.   Starting tomorrow, the interchange fee for debit cards(the bare minimum fee before the middleman aka merchant services company/clearing house) is moving down to 21 cents maximum plus a .01 cent possible fee for fraud prevention.  The old fee was .44 cents.  While this may not seem like a big deal but when you multiply it out times a few million dollars it ads up.  It has become very obvious who was making money on the credit card fees.  The banks.  Now that they can’t get the money from me they need to get it from someone.  They decided to take it from you.  Starting with Bank of America and eventually trickling down to all other banks, eventually you will soon see a monthly charge for your debit card.  Right now the fee appears to be $5.  It will be different for different accounts but it has become obvious that if you don’t make banks enough money they will charge you for their services.

I have actually financially benefited in more ways than I had originally planned.  As soon as I heard that of the upcoming changes I went out and got bids on my credit card services.  I figured with the drop in rates that I should certainly get a drop as well.  I truly think that many credit card services won’t lower their rate despite the interchange drop in hopes that the small businesses won’t be informed enough to ask why not.  I forced the issue asking what the new rate would be and sought a completely new rate package.  The result was more than I thought.  I found a company that was willing to give me a flat fee across the board on my cards, regardless of debit or credit or type of bonus cards used by my customer.  They analyzed my past years overall use and types of cards and got my fee below 2% fixed.  No matter what that is my rate.  No pin numbers, no worrying about what card is used.  They were willing to take the risk on what types of cards came through and hope that I had more debit cards and less airline cards. This was a drop of .3 percent from years past.  I had gotten killed with high end frequent flier cards in the past 5 years.  I had landscape customers and even worse, wholesale customers, paying for $30,000 jobs on a credit card.  It was costing me $1000 out of my own pocket just to take the card as opposed to them writing a check. And why wouldn’t they use it?  It costs them nothing and they get free stuff for doing it.  You may say just don’t take it or raise the price. As a business owner you hate to lose a hard earned customer over a few percent and people are so price conscious it’s become very difficult to raise the price at all.  You really don’t have a choice.

At some point something was going to have to give.  Right now its debit cards and their fees.  The next round is getting rid of the free miles and gifts.  If anyone is going to give away stuff let it be the busineses themselves.  We’ll pay for the fraud protection and the services but the days of the free iPods are going to end soon.  There may be a day when you have to pay to use your card again like the old days of American Express.  Why? Because nothing is free and the people that have been paying for things is shifting.  And you can bet your bank is going to be one of them.

10 Replies to “About Frickin Time: Your Paying $5 For Debit Cards Will Save Me Thousands”