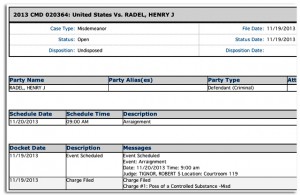 You could have seen it coming a mile away.  Trey Radel, a US Republican Rep out of Florida, was busted this week on cocaine charges only 10 months after taking office.  Before becoming known as the first sitting member of Congress to be busted for Coke since everyone did it 30 years ago, he was best known for DomainGate.

While I’m not judging the man on his domain registrations, when he first came in to public office I did do a big “WTF” when asked these questions on RollCall’s 5 Questions.  His “favorite city”?  Cartegena, Columbia.  I understand a lot of people love South American cities, and many are quite beautiful and inexpensive,  but to me it seemed a little odd.  I put together the known drinking, the sex domains, and crazy vacation spots and I knew it was going to be a crash and burn ending eventually.  And it did.  You’d hear more about it but Rob Ford stole his thunder this week.

On a side note.  Representative Radel didn’t miss a vote during his little coke addiction over the last 10 months.  He also proposed a bill that would make welfare recipients take a drug test before they could get their benefits. And his website states that he was working hard until the end trying to “lower your gas and grocery bills”. Sounds like a man of the people to me.